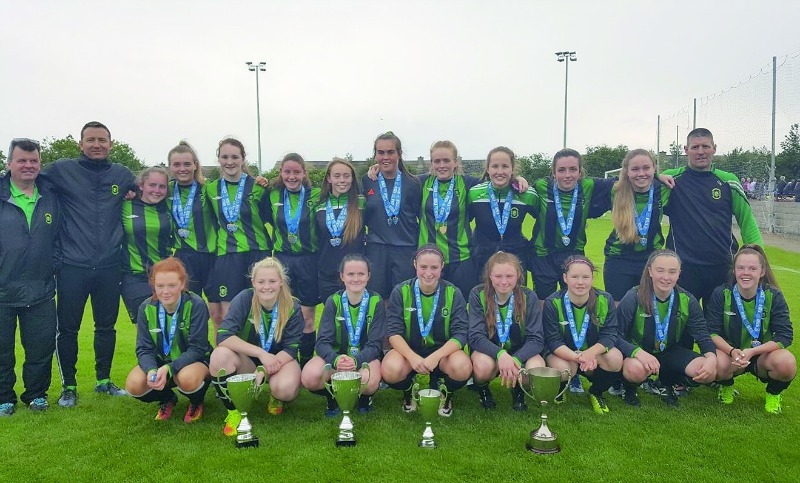 PEAMOUNT United’s Under 18 women’s team completed a phenomenal season with a 2-0 victory over Home Farm in the Carli Fitzgerald Cup Final on Sunday making it a quadruple for the Newcastle side.

Played in the Oscar Traynor Centre, this decider saw Gillian Keenan open the scoring for Peamount when she took on the opposing full back before cutting inside and letting fly to the target from some 20 yards out.

Shay Marten’s team had to work for everything they got against a gritty Farm side, but they eventually dug out a another score midway through the second half when Ireland Under 17 international Carla McManus produced some nice play to carve open the space she needed to steer the ball into the bottom corner.

This was followed up by an even more emphatic 8-2 trouncing of Kentstown in the Senior Challenge Cup final after which they completed their match to the league title with a 5-2 win over Home Farm.

Last Sunday’s achieve-ment meant they went through the entire season without losing or even drawing a solitary game.

And with all but two of this side eligible to play again at Under 18 degree next season, it augurs well for another dominant run by this team.

This team boasted three of the four Peamount players involved with the Republic of Ireland at the recent UEFA Under 17 Championship Finals.

Indeed, McManus, Doireann Fahey and Aisling Spillane together with Peamount senior team player Heather Payne all competed on that stage.

What’s more, the club saw two members line out for the Ireland Under 16s in the recent UEFA Development Tournament with six involved in the MGL Inter-League squad.