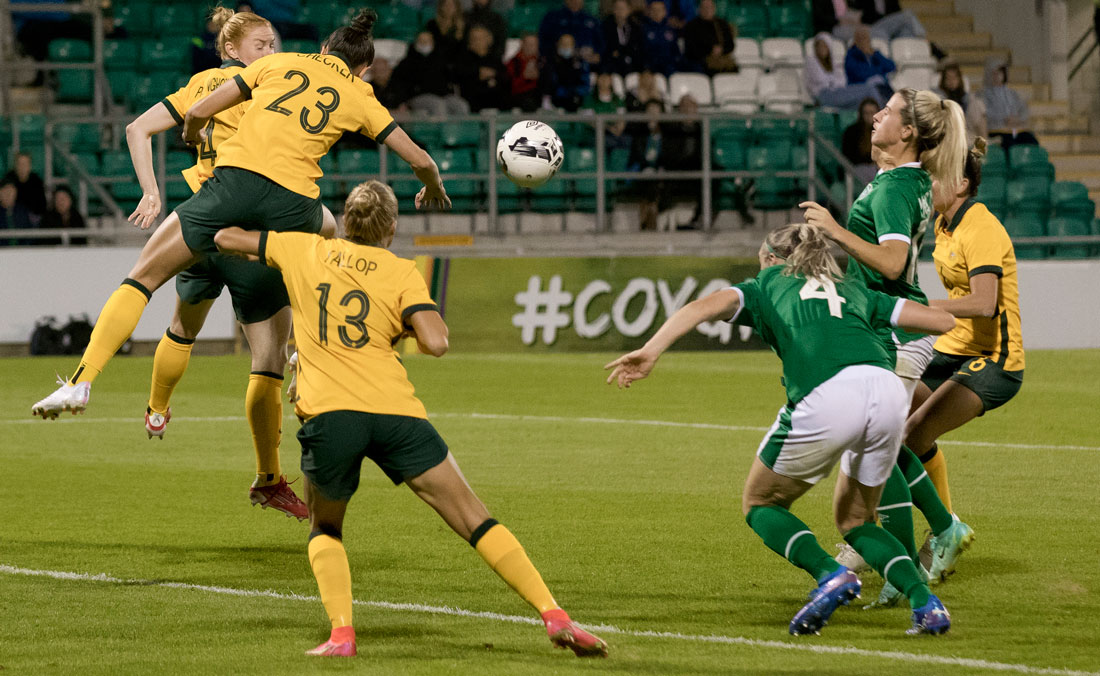 Quinn produces a winner for Ireland against Australia in Tallaght friendly

Louise Quinn got the all-important goal on 49 minutes as the Republic of Ireland women’s national team returned to winning ways with an impressive 3-2 friendly victory over Australia at the Tallaght Stadium this evening.

Following a run of seven straight reversals, this triumph will come as an ideal confidence boost for Ireland ahead of their impending return to competitive action in the 2023 World Cup qualifiers.

There was also a quartet of former Peas stars in the first 11 – Louise Quinn, Amber Barrett, Denise O’Sullivan and Heather Payne.

Lucan native Niamh Farrelly (who departed Peamount at the end of 2020 for Glasgow City) was listed amongst the substitutes and replaced Barrett on the hour mark. 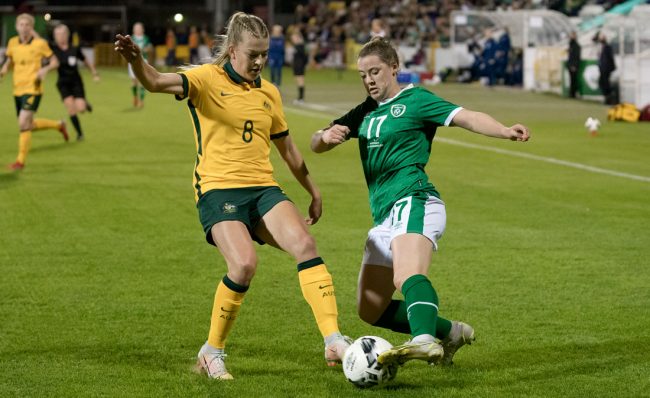 This game marked the return of supporters to a senior women’s international on these shores for the first time in 18 months and the 3,314 spectators that passed through the Tallaght turnstiles were treated to a goal-laden spectacle.

Irish debutant Lucy Quinn was seeking to announce her arrival on the international stage and managed to do that with just three minutes gone on the clock.

Her curling free-kick rattled the post and rebounded off Australian netminder Mackenzie Arnold before finding its way to the net.

While it is likely to go down as an own goal, it was a memorable moment nonetheless for the Birmingham City attacker.

Fourth-place at the Tokyo Olympics, Australia produced a strong response to this early set-back.

Ireland custodian Courtney Brosnan will be disappointed not to have kept out Mary Fowler’s strike on 14 minutes, but the visitors ultimately forced their way onto level terms.

Yet, if there was an expectation that the Matildas were going to take control of the contest, Ireland ensured this wasn’t the case.

From a corner on 23 minutes, O’Sullivan tried her luck from the edge of the box and found the Australian net via a wicked deflection to edge the hosts back into the ascendancy.

There was an element of fortune to all three goals up to this point and the same was true of the away side’s second equaliser on the stroke of half-time.

Initially on the radar of the Republic due to her Irish-born father, Fowler’s drive ricocheted wildly off Savannah McCarthy and beyond the reach of Brosnan.

This was a disappointing end to what was an encouraging opening period for Ireland, but they struck back once again on the restart.

Off a corner from the right-hand side, Louise Quinn delivered a trademark header to the bottom left-hand corner for her 12th senior international goal.

There was enough time for Australia to work their way back into contention, but credit must go to the Irish defence for keeping them at bay in the remaining minutes.

Quinn managed to keep a tight leash on star Australian attacker Sam Kerr – a two-time Women’s Super League winner with Chelsea – and was deservedly named player of the match as Ireland held firm to earn a memorable win against the 11th-ranked team in women’s international soccer.