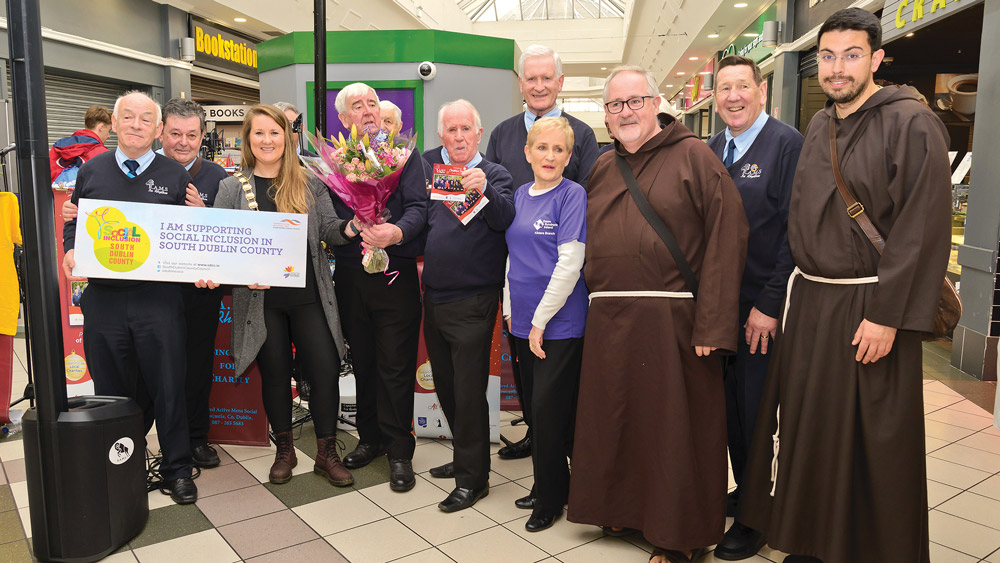 At the launch were members of RAMS, Mayor Emma Murphy and Capuchin Fathers in The Mill Shopping Centre

AFTER many months of practice and singing, the RAMS in Rhythm launched their first Christmas Carol CD in the Mill Shopping Centre in Clondalkin today (Saturday).

Proceeds from the sale of the CD will go towards four charities this year – SVP Local Branch, Down Syndrome, Our Lady’s Hospice and the Capuchin Fathers.

The launch was attended by the Capuchin Fathers, with Fr Kevin coming out to support the event which coincided with their fundraising day with €2,455 donated to the centre from Saturday’s fundraiser.

Diners in the Dunne’s cafe, all clapped along to the new release of songs on the CD, and Rudolf the Red Nose Reindeer, was such a favourite with the young children, as was I Saw Mammy kissing Santa Claus.

“The atmosphere in The Mill Centre was electric with so many of the shoppers gathering around and enjoying the launch and the fun. Many shoppers did line-dancing, did a sing-along, and got into the spirit of Christmas,” said Matt Dowling, secretary from RAMS.

“A total of €2,455 was donated to the Capuchin Day Centre, from the generosity of the customers, staff, and the premises of the Mill Centre.

“It was a great honour for us to have Mayor Emma Murphy at the launch.

“The Mayor spoke very highly of the excellent support that the RAMS give to many various charities, and the great joy they bring to events, including Peamount Hospital, Tallaght University Hospital, local nursing homes, fundraising in shopping centres, for their nominated charities”.

The RAMS in Rhythm consist of 13 members and members range in age from 75 years of age to 89 years of age and the new CD contains eighteen favourite songs.

CDs are also available from their Musical Director Liam O’Donnell on 087 2655683.