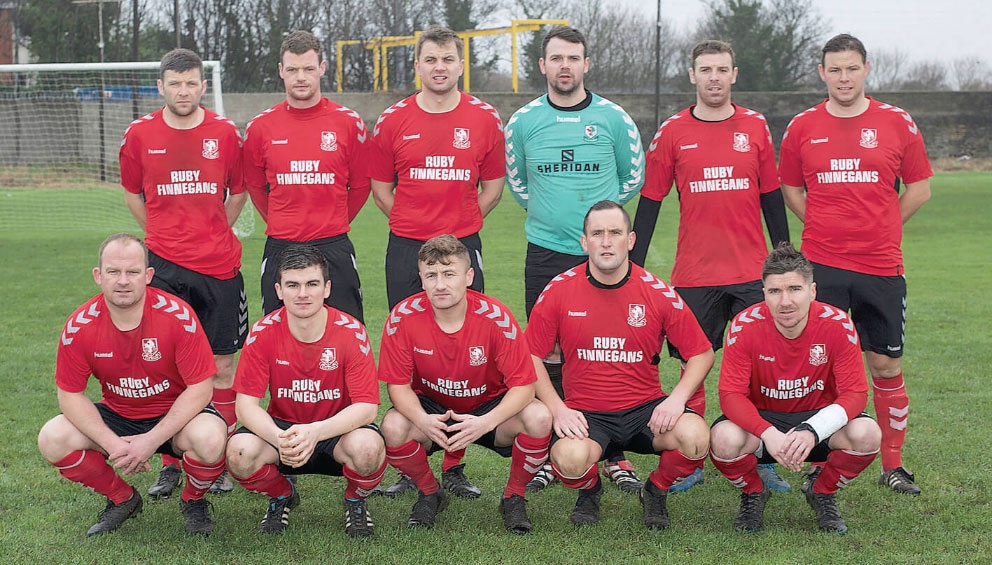 A GOAL in each half was enough for CIE Ranch to overcome local LSL Senior 1A rivals Inchicore Athletic, despite a late effort from the visitors forcing a nervy finish in CIE Works on Sunday.

In wet and windy conditions, Ranch built a two-goal advantage through wingers Liam Cummins and Graham Griffiths either side of the interval, holding on for the three points against a second-half Inchicore onslaught to leapfrog their opponents in the league standings.

CIE Ranch did just enough to clinch a derby win

Midway through the first half, CIE threatened to make a breakthrough when a deflected Cummins free-kick fell for Jay Walsh, but the frontman poked it just wide of the post.

The influential Cummins was dangerous down the left flank, and drew a save from visiting goalkeeper Paddy O’Reilly following a lung-busting surge moments later.

Ranch then finally netted the elusive opening goal that their pressure deserved, as left-back Glen McCabe’s free-kick delivery from the right was turned in on the volley by Cummins at the back post.

It had been largely one-way traffic, but Inchicore managed their first attempt on goal just before the break when forward Lee Gibson was fouled in shooting range, and Colgan’s powerful drive flew just over.

Inchicore began to pile on the pressure in pursuit of an equaliser when play resumed, calling CIE ‘keeper Sean Brazil into action for the first time to deny right-back Conor Bolton, following a swift counter-attack led by impressive midfielder Craig Smithers.

There was a further shaky moment for Ranch soon after, as Athletic winger Sean Plunkett’s cross was headed inches wide of his own goal by centre-back Darren Brady.

Some good interplay between Smithers and Bolton moments later led to the latter slipping Dean Power in on goal, but Brazil smothered the midfielder’s shot, as Inchicore continued to chase the game.

However, they were then dealt a sucker punch against the run of play, as the pressing Griffiths intercepted ‘keeper O’Reilly’s pass out from the back and slotted the ball past him into the net.

Inchicore showed great resilience, persevering in their search for a response even after this setback, with substitute Stephen Kinch shooting wide after good play from Smithers and striker Daniel Geraghty moments later.

Their efforts were eventually rewarded when Brazil parried from Kinch, and fellow replacement Aron McGuirk bundled the rebound home at the second attempt, with the ball adjudged to have crossed the line despite the efforts of CIE’s Gary Sullivan.

Bolton then came close to levelling the score in the dying moments with a glancing header from a Plunkett corner, but it sailed agonisingly wide, and CIE took the derby spoils.