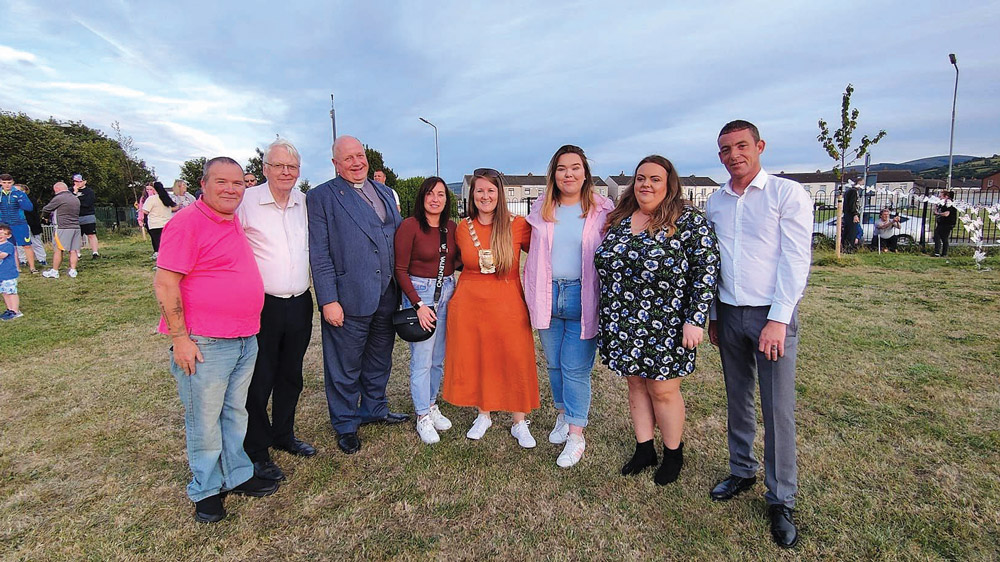 At the event in memory of those children and babies who have died were – Mark Luttrell, Cllr Charlie O’Connor, Canon William Deverell, Cllr Louise Dunne, Mayor Emma Murphy, Melissa Luttrell, Carrie Haskins and Anthony Bracken in Jobstown on Saturday

OVER 30 people attended an emotional event in Jobstown last Saturday, August 27, to remember children and babies who have died and gone on to be ‘little angels’.

Now in its seventh year, Light Up the Sky was founded by Jobstown father and daughter Mark and Melissa Luttrell after Melissa suffered a miscarriage three months into her pregnancy in 2015.

This prompted the 26-year-old woman to set up the event with her dad, to give people an opportunity to publicly remember the children they’ve lost.

The names of over 100 children who have passed away were read out at Light Up to Sky in the green space adjacent to Tallaght Leisure Centre last weekend.

Their names were also written on butterfly decorations that Melissa hung up around the park, which had drawings of teddies and boats.

“It was beautiful,” Melissa told The Echo. “People got more emotional this year than they did in other years.

“I got lights and hung them around the trees and there were butterfly decorations too. It felt like we were a big family that were supporting each other.”

The Light Up the Sky family has grown so much in recent years that sister events were held  around the country at the same time on Saturday, in places  such as Roscommon and Portlaoise.

“It’s about knowing that all of those people are there, and that we’re not alone,” added Melissa.

“Light Up the Sky is, after I went through what I went through, in memory of my little girl and this will be her legacy for years to come, and the legacy of the other children that people have lost.”

The emotive event featured a dove release and some bubbles, in an eco-friendlier vein as in previous years Light Up the Sky featured balloon and lantern releases.

“I’m excited for next year,” added Melissa. “It was so beautiful this year.”

For more information, visit the Light Up the Sky/Tree of Angels Facebook group.