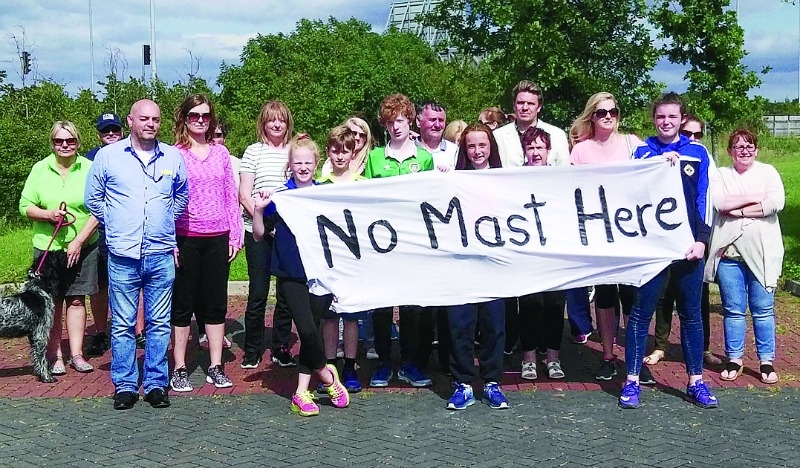 A CAMPAIGN against a 69 foot telecommunications mast proposed for pitches beside Woodstown Village has kicked off – with a public meeting being held this Monday, June 19, in the Iona Centre, Knocklyon.

County planners are currently considering an application for a 21 metre (69 foot) multi-user telecommunications mast and substation on council land in Knocklyon Park that is leased to Ballyboden St Enda’s GAA Club – which has filed a letter of consen t for the mobile phone mast.

However, many residents have expressed their concerns and objections to the mast, which if passed will to be located on parkland where children play and in close proximity to a large number of homes.

The mast will also be located on the path to school for local kids.

Residents have also questioned the need for the mast considering South Dublin County Council granted permission earlier this month to Cignal Infrastructure Ltd for a 15-metre multi-operator mast at Green Acres House on Stocking Lane – which, when erected, will be located around 950 metres away from the proposed mast in Knocklyon Park.

Resident Elaine Cudden, who is part of the campaign to stop the mast, told The Echo: “These masts should not be put on green areas.

“Not only will it be a huge monstrosity but it brings with it a number of health scares for people living in Woodstown Village and the surrounding areas.

“We do not know the long term effects of these masts but we do know that they emit a very strong signal and there are children using this park everyday and living close by.

“We have also spoken to estate agents who say the houses closest will decrease in saleability [if the mast is erected].”

Elaine, whose home is in close proximity to the proposed mast site, added: “I think our strongest objection to defeat this application is the permission that has been granted for another mast in Green Acres, which is only 950m away.

“In our opinion, the mast in Knocklyon Park is not necessary.”

The application for Knocklyon Park has been submitted by Shared Access Limited, with members of the public having until July 3 to make submissions or observations.

However, calls were this week made for the council to extend the five-week submission stage after documentation to support the planning application were not made available to the public through the council’s website.

Templeogue-Terenure councillor Paul Foley (Fianna Fail) contacted the council over the missing documents, which, after intervention, were uploaded onto the council’s website this week.

Cllr Foley told The Echo: “There was no documents up online for this application for more than two weeks, that’s two weeks out of a five week public submission stage where people who wanted to make an informed decision were unable to do so because of a lack of access to the relevant documentation.

“We have been told that there was a problem with the council’s scannerand that’s why the documents were not available.

“We did ask that the submission stage be extended to give people more time but the council said that it cannot change a statutory [process].”

While a large number of residents oppose the mast, there are others living in the community who believe that this infrastraucture is needed to improve reception in the area.

“This issue is a bit of a double edged sword”, Cllr Foley said.

“The reception in the estate is really poor and while I feel bad that people have terrible reception there has to be another solution… other than a 70 foot tall mast in the middle of a community.

“I am supporting the residents’ campaign [against the mast] because at the minute there is nothing to convince me otherwise.”

In a letter of consent dated March 20, Ballyboden St Enda’s GAA Club confirmed that as leaseholders of the property they have given their consent to Shared Access Limited to submit a planning application for the provision of a telecommunications structure on the land.

The Echo did put a number of questions to the council concerning its guidelines around telecommunication masts but planners declined to comment.

Members of the public are invited to attend a public meeting on the proposed mast this Monday, June 19, in the Iona Centre, Knocklyon, at 8pm.

NEWER POSTFour months for Tallaght man who damaged off-licence door and stole bottle of Buckfast
OLDER POSTOn This Day in 1975: “The potential of Tallaght is almost endless”