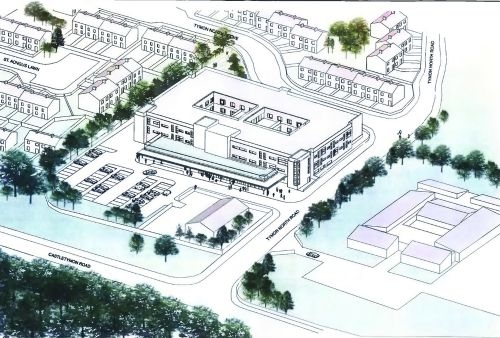 AN APPEAL has this week been drafted against planning permission granted for a 100-bed nursing home and day-care centre in Tymon North.

On July 30, South Dublin County Council granted permission for the significant development, which residents believe is too large for the site – with the nursing home possessing a bigger footprint than the neighbouring, National Basketball Arena.

Branded a ‘retirement village’, the development is planned for an 8,000sq.m. site purchased last year from South Dublin County Council by the HSE for €650,000.

Residents concerned over the development had a street meeting on Monday and, according to AAA councillor Mick Murphy, “It is clear that people are in shock as to the scale of what is being proposed and they have all said that there are existing parking and other issues already associated with Enable Ireland, Scoil Íosa and the Scouts Den, which are all based around the entrance to Tymon North [and beside where the nursing home is to be located].”

The draft planning appeal to An Bord Pleanála was also discussed at the meeting, copies of which were handed out alongside petitions.

In the draft version of the appeal, which The Echo has seen, and is being lodged on behalf of councillors Mick Murphy, Kieran Mahon and Paul Murphy TD, a number of concerns have been raised, including overlooking, parking and the nursing home’s rooftop garden.

The draft appeal also cites that the nursing home’s footprint is 15 per cent larger than the National Basketball Arena and that the council was aware of the size of the unit being proposed when they sold the site to the HSE last year.

In its conclusion, the draft appeal states: “It is clear to us that this proposal constitutes a clear contravention of the current County Development Plan and should be refused permission outright on this very clear planning grounds.

“If this was allowed to go ahead it would be a completely overbearing feature in what is otherwise a housing area.
“A building of this magnitude is completely out of character with the area.

“We are clearly not opposed to this site being used by the HSE for elder care purposes and made some suggestions in our original submission to South Dublin County Council which point towards what might be acceptable within the zoning specified.”

The final planning appeal will be lodged with An Bord Pleanála this Wednesday.