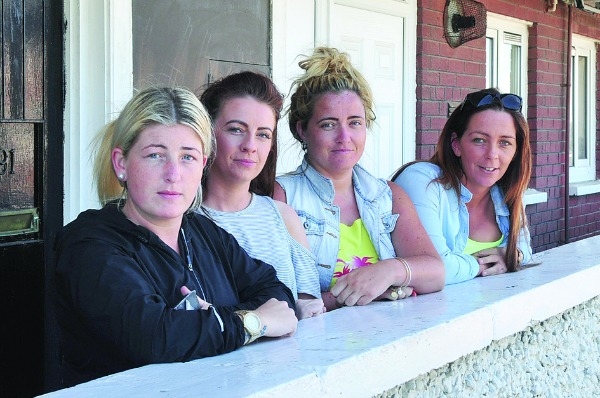 RESIDENTS have blasted “ongoing problems” at the block of flats in Tyrone Place in Inchicore, after a burst pipe flooded ground-floor units and leaked water into a number of units on higher floors.

The incident occurred on Saturday night, but it wasn’t until Monday afternoon that emergency services could fix the leak.

Tyrone Place resident Deirdre O’Donnell says water was coming through lights on the ceiling of her first-floor flat, and residents were forced to get an emergency electrician to call out.

Ms O’Donnell, a mother of two living on the first floor, said: “It’s not the first time this has happened. We tried to get someone out on Sunday, but we were waiting until Monday at 2pm before it was fixed.

“It was an emergency health and safety risk. Water was coming through light sockets. Most of us have kids, and nobody could tell us exactly the problem was. Our water was turned off for two days.”

A spokesperson for Dublin City Council said: “The flooding of a number of flats in Tyrone place was due to a burst pipe. The pipe has now been fixed and the water has been restored.”

Sinn Féin councillor Daithí Doolan said: “Residents called me in panic on Sunday morning. Council staff responded as quickly as they could. Unfortunately limited services were available because it was Sunday.

“I’ve called on council management to carry out a full audit of these flats and Bernard Curtis House to carry out repairs necessary to ensure this flooding never happens again.”

Ms O’Donnell says tenants have been told to put in a claims form, but “this could take months.”

She continued: “It has left a lot of dampness and the smell is disgusting. Nobody has come out to check the safety of the units. One unit on the ground floor was so bad, the pensioner’s family had to take him out, as there was nowhere else for him to go.

“It seems the council have limited people, and limited resources. They have an excuse for everything.”