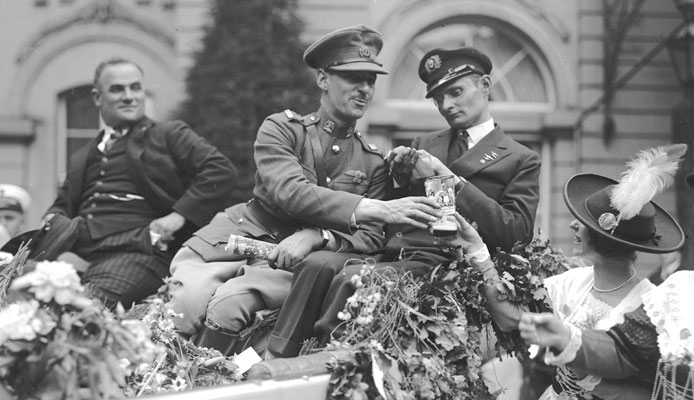 This week we are revisiting a notable landmark that has previously featured in this column, as it was the backdrop to a world-famous event that happened 82 years ago.

So we are walking out of Moyle Park house onto Convent Road, turning right up Tower Road and onto Ninth Lock Road where we will board the 68 bus at stop 6011 ‘Thornfield Square’, outside the Post Office.

We will stay on the bus for 14 stops where we then alight at stop 7483 named after today’s location – Baldonnell Aerodrome.

For it was here, from this airfield, that Colonel James Fitzmaurice of the Irish Army alongside two Germans Herman Kohl and Ehrenfried Günther Freiherr von Hünefeld took off on their historic flight to North America.

While Alcock and Brown had managed to fly from North America to Europe a few years before, difficult winds, in particular, had seen off numerous Europe-North America challenges.

So as they strapped into their cockpit seats, they would have been aware that the expectations of the world were on their shoulders, as they attempted to do something that had never been achieved before.

Fitzmaurice had been part of another, albeit failed, attempt when he and Captain Robert McIntosh were forced to abandon their efforts not long after they had flown over the last remnants of Erin’s Isle somewhere in Galway, due to extremely bad weather.

Baldonnell Aerodrome was first used by the Royal Air Force in 1917, and it then formed part of the RAF’s ‘Ireland Command’.

In 1922 the aerodrome came under the command of the Free State Army, and it became the headquarters of the newly established Air Service.

At that time there were 14 pilots based at Casement, and they flew 13 aircraft from the facility.

Today approximately 750 personnel form part of the Irish Aer Corps, and they operate 17  Aeroplanes, and 10 Helicopters, of various sizes and makes.

The aircraft chosen for this record breaking attempt was the ‘Junckers Bremen 33’ aircraft, which was built at their factory in Dessau 126km southwest of Berlin.

Fitzmaurice and his two companions flew proving flights over Dublin’s skyline to enable them to fully acquaint themselves with the Junckers plane.

So at around 4am on Tuesday April 12, 1928, 50 soldiers in the Free State Army helped to wheel the plane that had recently arrived from Germany, from Hanger 3 out onto the runway.

Not long after, with much cheering from the thousands who had descended on the outskirts of the facility to witness the event, the three men took off at around 5.30am, no doubt hoping and praying their next stop would indeed be on the other side of the Atlantic.

The flight was almost abandoned seconds after it began when a lone sheep wandered onto their flight path.

However they had thankfully built up enough speed to lift the plane over their obstacle and were now on their way into the record books.

Fitzmaurice was born in Dublin in 1898

The aircraft then flew for a long time as well as could be expected, but things were to change as their flight charts indicated they were not far from Newfoundland on Canada’s North-Eastern Coast.

A bad storm reduced visibility severely which forced them to climb to 6,000 feet to make certain that they were well clear of any mountain ranges.

As if that wasn’t bad enough, a brief respite in the weather brought a bit of a clearing and it was then to his horror that Fitzmaurice realised oil was leaking from one of the planes tanks onto the floor of their aircraft.

Thus a collective decision was taken to prepare the aircraft for landing at the first site of land and so the aircraft began a general descent and the speed was slowed to enable touch down.

When the aircraft did touch down on Greenely Island, 36 hours after it left Dublin, two Germans and an Irishman created history as they were the first ever pilots to successfully make a East-West journey across the Atlantic by plane.

The trio became a worldwide sensation and would be taken on a no expense spared ticker-tape ride through Manhattan in New York as many thousands lined the streets to catch a glimpse of these famous aviators.

Today there is a plaque on Broadway commemorating the event.

Afterwards they were toasted at a reception organised by US President Calvin Coolridge.

On his return to his homeland, the Colonel in the Irish Army was given the Freedom of Dublin City, a prestigious honour that has also been conferred on the likes of Mother Theresa and Nelson Mandela.

Sadly Fitzmaurice was to move to the United States later in life in disgust at the Irish authorities refusal to fund plans he had for rejuvenating the air services in the state.

So the next time your Sat-Nav says you are turning onto Fitzmaurice Road in Rathcoole, you might salute this record-breaking Irish aviator.