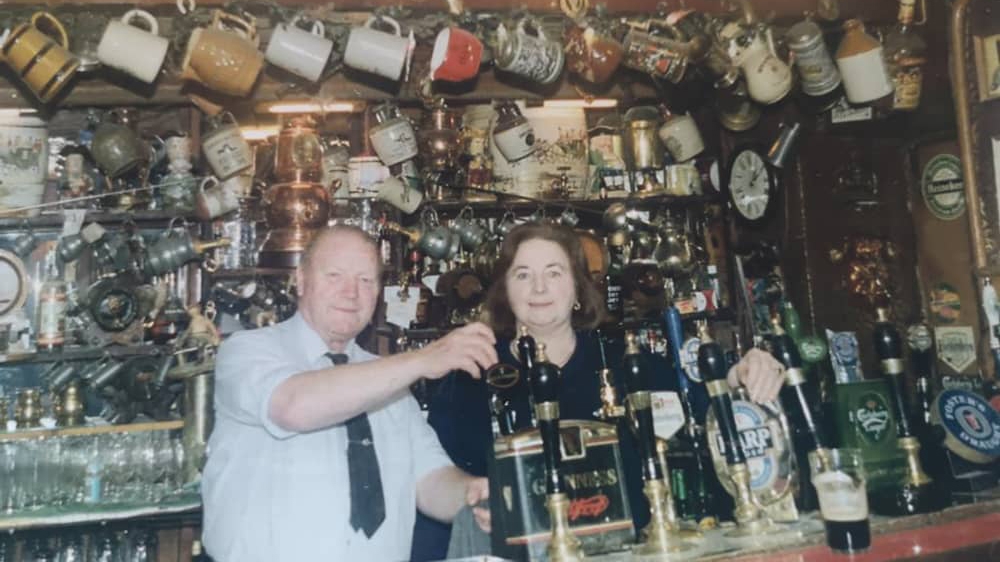 ROSEMARY Delany, who ran the Knocklyon Inn for over four decades and had a strong family history in the Tallaght area, has been remembered by her children as “a very caring and supportive mother” after she passed away earlier this month aged 88.

Rosemary was born in Lancashire, England, on August 12, 1933, to May Muldoon-Kirby, from Tallaght, and Frederik Kirby from Galway, who had emigrated to England in the early 1930s.

Rosemary’s mother was born in Haarlem, Old Bawn, in 1905 and grew up in the area, while her great-grandfather, Timothy Muldoon Senior, lived in Allenton House until his death in 1931, when Rosemary’s grandfather John then moved into the house.

While Rosemary grew up in England, she had fond memories of the summers she spent with her relatives in Allenton House, according to her daughter Mary.

Mary told The Echo: “One of Rosemary’s earliest memories was as a child aged about four, putting the year at about 1937.

“Herself and her brother were brought to Allenton for a summer holiday. Their trip coincided with the car racing around the Tallaght/Templeogue/Firhouse circuit.

“It had been pre-arranged that Mr Willie T. Cosgrave’s car could be parked in the yard up at Allenton and, as he emerged from the chauffeur-driven car, her mother went over to greet him and Rosemary remembers Mr Cosgrave shaking her tiny hand and that of her brother.

“Then the party all walked down together to view the racing from the end of the field at Allenton which was across from Bagnall’s farm, which is where the Old Bawn Shopping Centre now stands.

“Rosemary recalled not liking the sound of the cars as they passed their vantage point and being quite frightened by the noise.

“She and her brother instead amused themselves with some snails they had found and had a snail race on the low wall in front of them.”

Rosemary was six when the second World War broke out and in the years that followed she sorely missed her annual trips to visit her family at Allenton House, where her uncle Tim Muldoon then lived.

At age 13, she was elated to be able to visit her extended family again when the war had ended.

“There was much ado about their house and the suitcases were brought down and carefully packed.

“Six years had passed since their last visit. When they arrived in Dublin, her uncle Tim had sent in a horse and trap to pick them up from the boat and bring them all to Allenton.”

It was during this trip that she first met Michael Delany – who her uncle Tim knew as the Delanys lived near the Muldoons – when Tim gave Michael and his brother, Noel, a lift when he was driving through Terenure.

Rosemary with her children Mary, Michael and Rowena

In 1955, after she had qualified as a primary school teacher and was living in London, Rosemary returned to Allenton House for another summer visit and met Michael’s sister, Lena, who invited her to come to tea at the Delanys’ pub in Knocklyon.

The Delany family have been the proprietors of the Knocklyon Inn for generations since the 1850s, and it was here where Rosemary and Michael met as adults and began dating – and they would later go on to run the pub together.

Michael and Rosemary married in January 1958, and they went on to have three children, Mary, Michael and Rowena.

The couple ran the Knocklyon Inn from 1975, when Michael’s sister Lena passed away, and when Michael passed away in 2002, his son Michael stepped into the breach and ran it alongside Rosemary, and Michael is now carrying on the family business.

Explaining what her mother was like, Mary said: “Rosemary, as well as being a deeply religious person with a great faith, was also a very caring and supportive mother and enormously encouraging to her children when they were young adults.”

“She had a great eye for fashion and always managed to look glamorous no matter what time of the day or night it was,” added Mary.

“Over the last few years Rosemary had become a little slower in her movements, but was still as full of life and her many interests as before, and this continued until her last day with her family.

“Rosemary passed away in her sleep in the early hours of Holy Thursday morning, April 1, 2021, so peacefully, and full of happiness to her last breath that she was in her own home surrounded by those who meant everything to her.

“Rosemary loved Easter time and it was at Easter time that God chose to take her to her Heavenly home. She lived her best life.

“May the lovely Rosemary – a very kind mother and a good friend rest in eternal peace. RIP.”

Rosemary’s funeral was held in St Colmcille’s Church, Knocklyon, on April 6, and she was buried in Bohernabreena Cemetery with her husband.