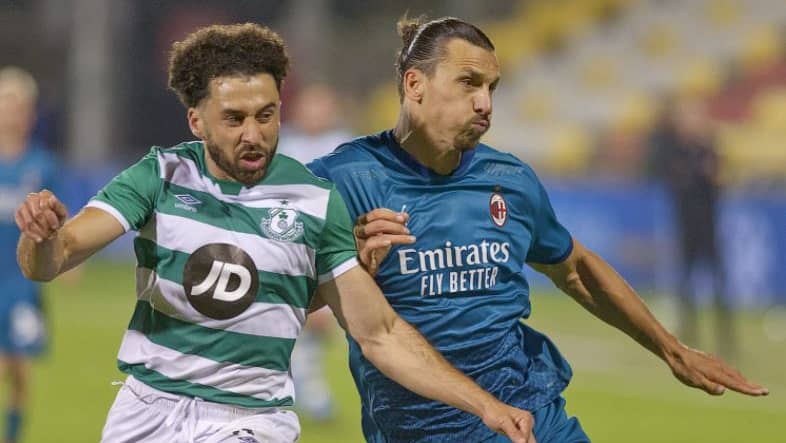 SHAMROCK Rovers gave a very good account of themselves despite going down 0-2 to seven-time European champions AC Milan in their Europa League qualifier in Tallaght Stadium tonight.

All eyes were on Milan superstar Zlatan Ibrahimović and it was the Swede who opened the scoring on 23 minutes when he combined with Hakan Çalhanoğlu to carve open some space and finish clinically.

Çalhanoğlu doubled the Italians' advantage midway through the second half when he produced a lovely finish after a tidy lay-off from Alexis Saelemaekers.

Rovers were not without their opportunities with Gary O'Neill, Ronan Finn and Tallaght man Aaron Greene all keeping goalkeeper Gianluigi Donnarumma on his toes in the opening half.

The former broke on to a through ball by Jack Byrne and forced the Milan netminder to get down low and make the stop from a tight angle with Greene’s similar effort from the opposite right hand side pushed out for a corner.

Greene was again unlucky not to get on the scoresheet on 72 minutes when great work by Graham Burke helped open up a chance for the Rovers striker but Donnarumma denied him once more.

Jack Byrne gets his pass away (Image: Paddy Barrett)

There was no doubting Milan were full value for their victory with Ibrahimović heading over early on while Çalhanoğlu’s half volley travelled the same direction and Aaron McEneff was forced into a goal line clearance for the hosts.

Yet, led by Roberto Lopes in the centre, the Hoops defence stood up to the Milan challenge for the most part with bodies thrown at ferocious attempts on more than one occasion.

Jack Byrne worked tirelessly all night, his intricate play in the centre and ability to spread the ball in any direction helping put Rovers on the front foot at times.

It was not the atmosphere the Hoops would have wanted on a massive European night like this, but they were far from overawed in the face of this huge challenge and can be more than satisfied with the performance they served up.