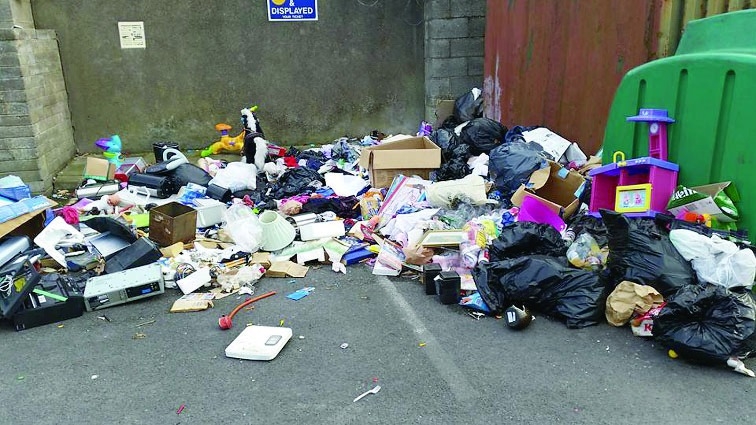 ONE of the worst cases of dumping in recent times has cropped up right in the heart of Clondalkin Village.

A mountain of household items and children’s toys appeared at the car park behind the Steering Wheel pub on Saturday morning.

The rubbish was dumped beside bottle banks and inspected by Clondalkin Tidy Towns (CTT) during their weekly clean-up – who called it “an embarrassment” for the area.

A statement by CTT said: “It appears to be household items and, very strangely, children’s toys. If anyone has any information on who has dumped this, please report it to a local representative or to South Dublin County Council.

“The carpark is also severely littered and is an embarrassment to Clondalkin. This must not be tolerated.”

CTT member Tommy Keogh said it was “pretty bad” and one of the worst sights he has seen.

Although the waste has been reported to South Dublin County Council, the car park is located on private land, and the rubbish pile remained in place on Wednesday evening.

Sinn Féin councillor Mark Ward said it was a “horrendous” amount of rubbish.

Cllr Ward said: “It’s located right in the heart of the village, which is rare for this type of activity. Hopefully CCTV cameras will be able to identify who is responsible.

“I’d encourage people to be vigilant and report dumping to the council. I’ll be getting in touch with the Steering Wheel, the litter warden and the management company.”

In one recent case, up to 11 bags of rubbish were discarded, but a receipt and mobile number was discovered in the rubbish.

The Echo called the Steering Wheel late on Wednesday, but couldn’t reach a manager before going to print.