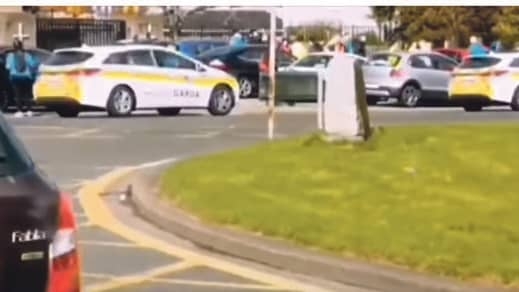 A RUNNING club have vowed to keep providing an outlet for members’ mental health after videos of gardai attending the aftermath of a weekend race did the rounds on social media.

The footage featured a number of garda vehicles at the scene outside Assumption Church in Ballyfermot on Saturday, March 13 at approximately noon – as members of the Trotters Running Club completed a race.

Members of the club and gardai exchanged dialogue at the scene, but no offences were recorded.

Gardai had no comment to make on the incident.

Shane Sheil, from Trotters Running Club, which was set up last October during lockdown, said he was preparing medals for runners finishing their race, when a police car stopped by the scene.

“I didn’t think it would be an issue. A couple of lads were in a debate with them, I didn’t get involved myself. There was a lot of decent policemen there, they were completely oblivious as to what we were doing.

Gardai at the scene on Saturday, March 13.

“The club was set up for everyone and specifically for mental health reasons, including me myself. If it wasn’t for this club, I don’t know where I’d be. So many people have said the same thing to me, they’re in the same boat.

“Mental health is a big thing at the moment. A woman’s body was found in the canal, another local woman died from suicide in lower Ballyfermot last week, a lot of people are out of work. It is hurting people. We are not well equipped to deal with it.”

Established on October 27, by Shane and two other residents Ian Nolan and Tommy Powell, the club has proved popular in lower Ballyfermot.

Unusually for a running club, they cater for very young kids, but this has led to a lot of young families joining up.

One Trotters member Ellarose Barry (5) raised over €5,500 by running every single day during January, accumulating over 80km in a fundraising drive for a kid with special needs on the Northside.

Ella runs weekly with her mother Ruth Barry, something other members enjoy at the club, according to Shane.

“Parents like that they have a positive activity to do with their kids, and for some young kids it is their first experience of a sports club,” he said.

“Some clubs said in the last year they are not accepting new members and that is their own prerogative.

“But this club can help maintain people’s fitness and competitiveness for young people who cannot play sports right now.”