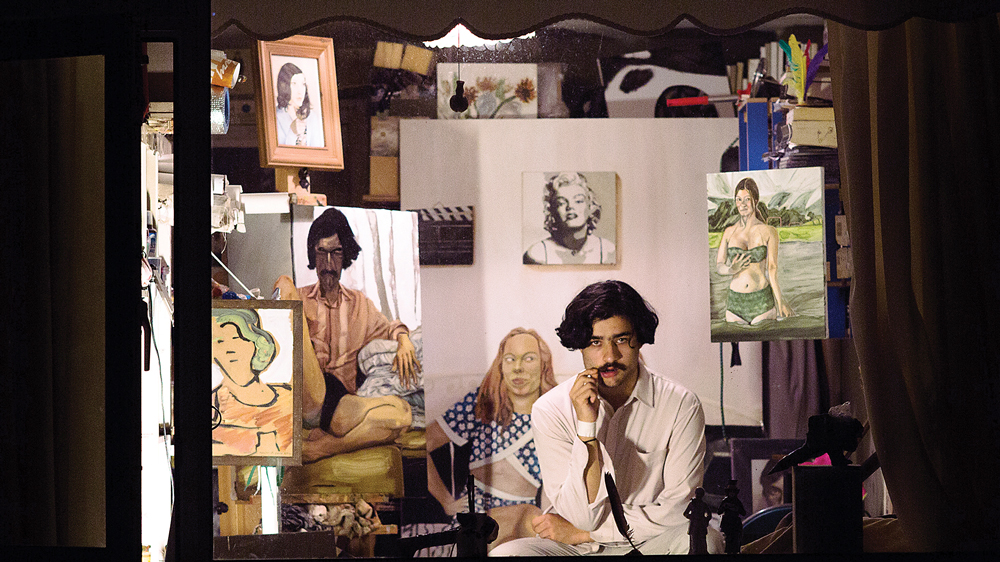 Depicting domestic scenes in a sometimes unflattering or surreal light is a key component of the work of 27-year-old Salvatore Fullam, who paints under the name Salvatore of Lucan.

A native of Beech Park in Lucan, Salvatore is a skilled artist whose work has been nominated for the prestigious Zurich Portrait Prize in the National Gallery and is a past recipient of the Arts Council’s Next Generation Award.

Salvatore, a past pupil of Coláiste Phádraig CBS in Lucan, explores themes of home, identity and relationships in his work – his mother and grandmother regularly feature in his paintings.

Having recently been nominated for the Zurich Portrait Prize for the third time, Salvatore told The Echo about why domestic environments are such an enduring source of inspiration for his work, and he explained his propensity for creating intentionally unflattering self-portraits.

Throughout your life, you’ve constantly been asked where you’re from, which led you to create art under the name Salvatore of Lucan. How did you feel about changing your name as an artist, and did it have the desired effect?

I changed my name as a bit of fun.

Being mixed-race while also randomly having an Italian name meant I’d often be asked where I’m from.

As for the desired effect, I suppose I wanted to sound a bit grand, Salvatore of Lucan like Da Vinci or Lord Lucan or something.

A lot of your work depicts domestic scenes, including paintings of your mam and your grandmother, whom you live with. How do they feel about seeing your portrayal of them on canvas?

I’d say my family in the recent past mightn’t have been so happy to see themselves represented, because I can be quite unflattering when I paint.

That seems to happen naturally when I paint, but I consciously tried not to do that for ‘Me Ma Healing Me’ and I think my Ma likes the painting for the Portrait Prize this year.

What is it about domestic scenes specifically that capture your attention as an artist?

That’s actually a good question, and I’m not sure. I suppose, for me, a lot of painting is trying to capture a sort of energy.

And I think the energy I’m most interested in is that of the domestic. I don’t know why but, for me, there’s something quite intense about being in anyone’s home. I always feel like you could cut the energy with a knife.

One of your paintings, ‘Me and My Dad in McDonald’s’ serves as a representation of your relationship with your father, whom you’ve met once, and the distance and disconnect between both of you. What was the process of creating that painting like?

And while I was there, I got the news that I’d been given my first solo show by Pallas Projects as part of their AIP programme – a great programme for emerging artists, I must add.

I decided while reading the email that I’d change my name to Salvatore of Lucan, and quickly changed my website and my Instagram name.

When I got back, I had about two months to make three more paintings for the show, and I decided to make one about meeting my dad. It was a strange painting to make.

I didn’t know how I felt about the situation, and was quite upset really, but I like the way the painting turned out.

You previously created a series of intentionally unflattering self-portraits for your 2018 exhibition ‘Salvatore of Lucan’s Show of Himself’. Why was it important for you to depict yourself in that manner?

In terms of painting myself in an unflattering light, I don’t really know if it is important to me, but it is a compulsion.

I remember seeing a lot of artists making overly flattering self-portraits while I was in college, and I thought it was a bit embarrassing for some reason.

I think self-love is a great thing, and I’ve a healthy amount of that in my life as well, but I’d like to show the self-loathing we all feel as well.

Sometimes you simply want to do things in art that you see are missing from regular art.

Your painting ‘Me Ma Healing Me’ was recently shortlisted for the Zurich Portrait Prize 2021, how did you feel when you found out it had been shortlisted?

I was delighted when I got nominated. It’s my third year to be selected but I’d really like to win. Art is a struggle and the prize money is class.