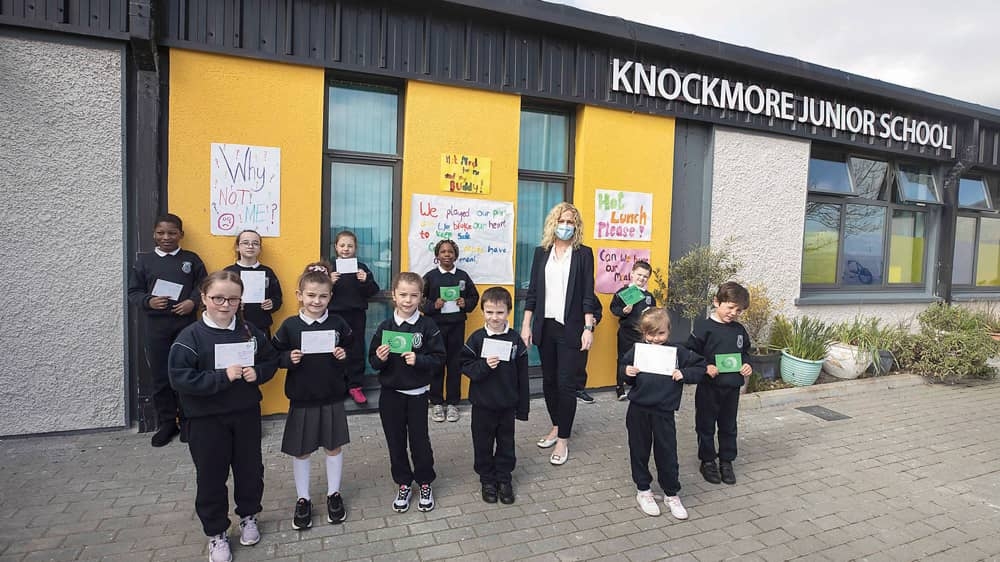 School angry they are left off Hot Meal Programme

JUNIOR school children are designing and writing postcards to the Minister for Social Protection, Heather Humphreys TD, to request the decision to leave them off the Hot School Meals Programme be reversed.

Knockmore Junior School and Cnoc Mhuire Senior School, which are on the same campus in Killinarden, both registered expressions of interest in the scheme after invitations were issued late last year.

Of the 281 expressions of interest received by the Department, 189 schools were selected including both Sacred Heart Junior and Senior Schools, and Cnoc Mhuire Senior School.

Where the frustration lies for Knockmore is in how it and Cnoc Mhuire has fluid progression between the junior and senior schools, with siblings on either side.

“I understand it is only a pilot scheme and we weren’t awarded it based on a lottery system but I feel like it’s just not fair for the children in Knockmore to not have them,” Principal in Knockmore Junior School, Dearbhla Byrne, tells The Echo.

“It should have been considered to feed a family rather than only feeding individual children, that’s where it’s created that separation.

“In our school, the junior side, we have children aged four to eight and Cnoc Mhuire Senior School on the same campus caters for children up to 12 then.

“So what is happening for families in our schools is they are sending the bigger siblings to the senior school in Cnoc Mhuire and they are getting the hot meals, and then the little brothers and sisters aren’t getting them in the junior school, here in Knockmore.

“For fairness sake, the brothers and sisters on either sides of the schools don’t have equal access to the meals or to the same benefits a hot meal brings.”

The pilot scheme being run by the Department of Social Protection is providing hot school meals to mostly DEIS schools (90.5 percent).

Catering for 149 pupils, Knockmore is a DEIS school, which means they have been recognised for needing additional supports to tackle any educational disadvantages.

The goal of the hot school meals programme is to provide regular nutritious meals to children who, due to food quality, may be unable to take full advantage of the education provided to them.

“Getting a hot meal in school helps the children to focus, to learn and there’s the social aspect of the children all sitting down together with their lunch,” Ms Byrne says after detailing the objectives of the scheme.

“That’s what they’re missing out, but their older siblings aren’t on the same site as them.

“They are the only school children in the parish of Killinarden not to get the hot school meals.”

The issue of the disparity between the junior and senior schools was raised by Francis Noel Duffy TD in Dail Eireann on April 28.

Responding, Minister Humphreys said: “The school referred to by the Deputy submitted an Expression of Interest for the Hot Meals Scheme as part of the five school Killinarden School Completion Programme.

“Unfortunately the school was not selected and I appreciate that this is disappointing for the school.”

Minister Humphrey’s did outline further consideration will be given to use any excess capacity with a number of additional schools and that further provision of hot meals will need be “considered in a budgetary context”.

Speaking in Dail Eireann on Tuesday, Paul Murphy TD raised how the scheme is “drastically underfunded” and called upon Taoiseach Micheál Martin to intervene with Minister Humphreys and the Department to get them to reconsider the decision to leave Knockmore out.

“Again I’ll raise with the Minister for Social Protection the issue of the hot meals for that specific school in Killinarden,” An Taoiseach replied.