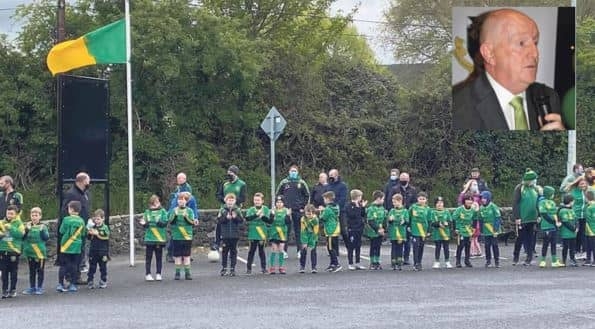 TEAMS from Thomas Davis GAA Club formed a guard of honour outside their clubhouse for the funeral procession of club stalwart Con Deasy on Saturday morning (May 8).

Mr Deasy, who was originally from Ballyfermot, became involved in the club after he moved to Millbrook Lawns with his wife, Rosemary. Their sons Gerard, Anthony and Chris, played for the club.

Mr Deasy was involved in the club for over 30 years and he had many roles, including mentoring teams and being on various executive committees, and he served as chairman for 2013/2014.

Mr Deasy passed away on May 4 in Tallaght University Hospital after a long illness, and he has been fondly remembered by club members.

Dave Griffin from the Thomas Davis executive committee told The Echo: “Con was very obliging and committed to the club.

“He was very easy to deal with, and his attitude was to get people to work together. He was very personable.”

For many club members, Mr Deasy will also be fondly remembered as the MC for numerous Thomas Davis events, including player of the year and club draws.

He still maintained his involvement in the club while he was ill, such was his commitment to Thomas Davis.

Teams in Thomas Davis formed a guard of honour

“Con had stepped back from the club, but he was always around – he never lost his interest or enthusiasm,” explained Mr Griffin.

“We were all devastated when we heard that he had passed away. We knew he had been in hospital, but we all felt that he’d pull through.

“He’ll be remembered and deeply missed by all in the club.”

Thomas Davis’ under 9s football and hurling teams, and the senior men’s and ladies football teams formed a guard of honour at the club on Saturday morning, as Mr Deasy’s funeral procession passed by on his final journey.

Thomas Davis’ PRO, Colin Brown, said that when the funeral procession passed the guard of honour that it was “a touching moment” for everyone in attendance.

Mr Deasy is survived by his wife Rosemary and his sons Gerard, Anthony and Chris.