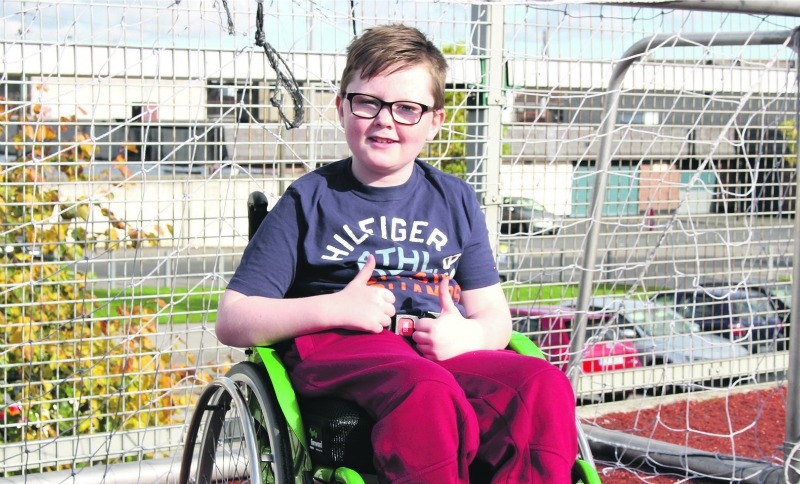 Sean will get to lead out Ireland team at the Aviva

SEAN Scully, the youngster shot and paralysed in Cherry Orchard three years ago, will lead out the Republic of Ireland football team as a mascot in the Aviva Stadium, for the crucial World Cup qualifier against Wales in March.

FAI CEO John Delaney announced the news at the Ian Lyons football tournament, which took place in Ballyfermot on October 20 to raise funds for Sean (9).

The 5-a-side tournament at Ballyfermot Leisure Centre is held each year to honour Sean’s late uncle Ian, who played football with Youthreach and Ballyership FC.

The gunman who shot St Ultan’s pupil Sean while he was playing with friends outside his home in Croftwood Gardens in 2014 has never been brought to justice.

Shrapnel caused catastrophic damage to the spinal cord, paralysing him from the waist down.

Residents were intimidated by individuals to keep quiet during garda investigations.

Sean’s mother Gillian told The Echo the tournament meant a lot to the family, as it is close to their heart, but said they are taking Sean’s recovery day by day.

“His health is fine, but he is paralyzed from the waist down, and he still gets quite down,” said Gillian.

“He hates being in a wheelchair, he loves to play sports, and is getting bigger, so we have to play it by ear. There are daily challenges and personal challenges with his own stuff and routine. The community has been brilliant and doesn’t forget, like some other areas have.”

The event was organised by Dublin City Council in partnership with the FAI.

Derek Ahearn, Sports Officer Dublin City Council, established the football tournament in honour of Ian, a young kid whom he worked with.

“Ian died 11 years ago, he was a loveable rogue and taken far too early,” said Derek.

“I worked with Ian in the Ballyership. The tournament involves local youth projects and a few outsiders. The family are well known and I thought it would be the decent thing to do.”

Ballyfermot Youthreach beat Matt Talbot Trust 5-3 in the final, and during the trophy presentation they learned they would also be going to the Aviva for the Wales match.

Thorntons sponsored the event, and contributed a fee towards the running costs.

Ian’s mother Bernie Lyons, thanked everyone for their support, and urged those in attendance to “follow your dreams.”

Sean celebrated his ninth birthday in September, but still sleeps and lives downstairs in the family home.