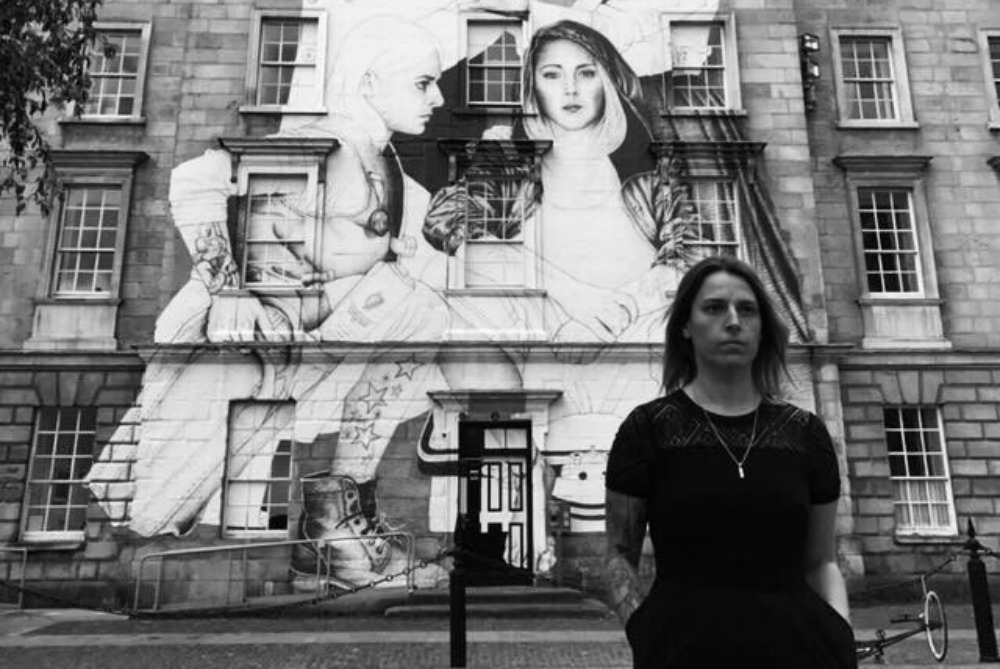 Senator Lynn Ruane features in a new piece of public art created by artist Joe Caslin, which is the first of a three-part series highlighting the importance of volunteerism in tackling some of Ireland’s most pressing issues; drug addiction, mental health and direct provision.

Caslin, who is best known for his large-scale black and white murals, completed his first of the three pieces recently in the Front Square of Trinity College Dublin.

Three days in we are almost there. What an honour to be part of such an important piece of art by @joecaslin #reducetheharm #thevolunteers pic.twitter.com/q0OEBhdrIG

Known as The Volunteers, the mural is inspired by ‘The Controlled Drugs and Harm Reduction Bill’ which was introduced to the House of the Oireachtas by Senator Ruane an Aodhan O Riordan recently.

The bill would decriminalise the possession of drugs for personal use and create a Drug Dissuasion Service to support people found in possession and divert them away from the courts.

Speaking in her first weekly column in the Echo last week, Senator Ruane said: “It’s my personal belief that decriminalising controlled drugs along the lines I’ve described would be a transformative improvement over our current criminal justice approach and ensure that people experiencing serious drug addiction would be directed to the help and treatment they need.”

Trinity College – street art advocating for a health based response rather than criminal response to drug addiction➕ pic.twitter.com/bUFJDGDox5

The latest powerful mural features Senator Ruane in the bottom left, while Fiona O’Reilly who is Managing Director of SafetyNet, a primary care service for people who are homeless is also included.

In the centre of the piece Rachel Keogh, who is an advocate in recovery from addiction, features, while the male figure is, according to Caslin, representative of Ireland’s healthcare service which is “frequently secondary in drug abuse intervention due to failed government policy and the mischaracterisation of drug addiction”.

A short spoken-word file will accompany the mural. Written by poet Erin Fornoff, it will be performed by Ally Ni Chiarain.