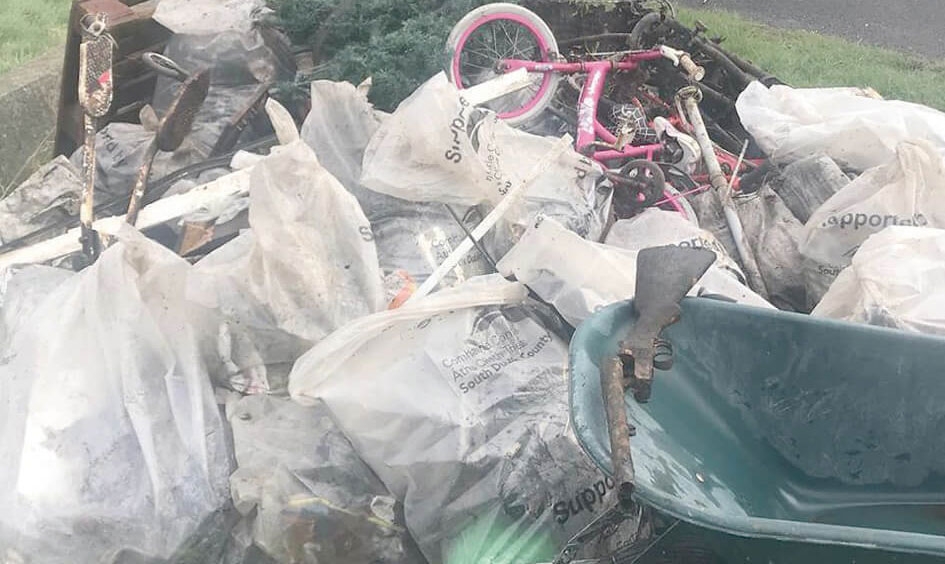 Shotgun recovered from Dodder during clean-up

A SHOTGUN was among the items recovered from Tallaght’s Whitestown Stream, when a volunteer-led clean-up resulted in a haul of 20 bags of rubbish, three bikes, one motorbike, a mattress, shopping trolley and more.

On Sunday (February 3), a team of Dodder Action volunteers took to the Whitestown Stream, where it enters the Dodder at Bolbrook.

A shotgun was recovered at the Whitestown Stream. Photo by Alan Edgar

In recent months, Dodder Action volunteers have been focusing on the Whitestown Stream, with Firhouse man Wladek Gaj leading regular clean-ups of the area.

The clean-up resulted in a large volume of waste being removed from the stream and its banks, including a shotgun.

Speaking with The Echo, Victoria White, Chairperson of Dodder Action, confirmed that the discovery was reported to gardai.

Looking forward to the year ahead, Ms White said that Dodder Action hopes to establish more local groups along the river, which would engage in more localised, regular clean-ups.

It’s hoped to have five or six groups operating at different points along the entire stretch of the Dodder, including Tallaght, Firhouse and Rathfarnham.

“Our absolute aim this year is to have cells [of volunteers] up and down the river,” Ms White said.

“We have our big all-Dodder clean in April but we would like to have monthly clean-ups.

“It would be great to have volunteers in Tallaght, Firhouse and Rathfarnham [doing monthly cleans].

“The Ballyboden Residents Association is doing a lot of work at the moment on the Owendore [river].”

She added: “We are working with a lot of local groups, and getting involved in the clean-ups is a great way to meet people… and it’s fun.”

Any individuals or groups interested in getting involved on their local stretch of the Dodder is invited to message Dodder Action through its Facebook page.