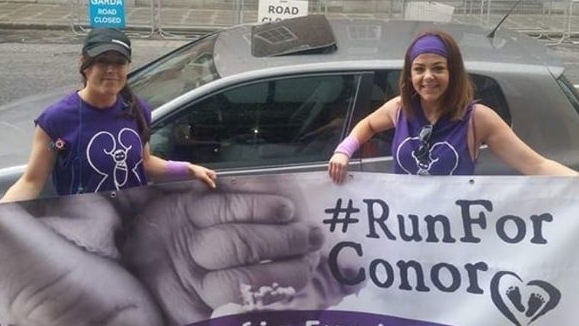 Sinead is running mini marathon to raise awareness for Féileacáin

A LOCAL mother is continuing with her mission to raise funds and awareness for national charity Féileacáin, which provided her with support and information after her baby Conor was stillborn at 38 weeks.

Originally from Perrystown and now living in Kingswood, Sinead Doyle has raised €12,500 over the past four years for Féileacáin, the Stillbirth and Neonatal Death Association of Ireland.

Sinead at home with her kids Liam, Maria and Megan

Now, Sinead has her sights firmly set on the Women’s Mini-Marathon, and is seeking support from members of the community to run, jog or walk in aid of the charity – and inviting local businesses to come on board as a sponsor.

Alongside raising funds and awareness for the charity, Sinead is also running for Conor – to “keep his name and memory alive”.

Féileacáin was founded in 2010 by a group of bereaved parents, who came together to offer hope and support to others affected by the loss of a baby.

“When Conor was stillborn at 38 weeks, Féileacáin came into the hospital and left a memory box for me and my partner Mick”, Sinead told The Echo.

Sinead and Mick with Conor.

“There were two teddy bears in the box, one for us and one for Conor, leaflets, information on support groups.

“They also help you to keep memories… like the baby’s footprints and handprints, measurements, weight, lock of hair.

“It’s nice to have these now, at the time I would not have thought about any of it.

“At the time I just wanted Conor in my arms, I was numb to everything else.”

Having experienced first-hand the impact of Féileacáin’s support, comfort and friendship, Sinead has organised numerous fundraisers in recent years for the charity.

To date she has raised €12,500, and hopes to increase this figure by taking on the mini-marathon for the fourth time.

For further information on Féileacáin visit the charity’s Facebook page or Féileacáin.ie