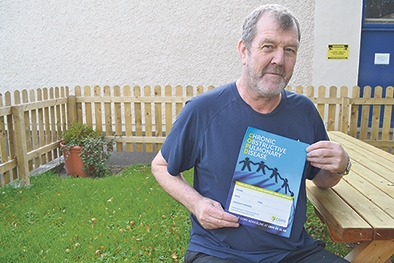 A SOCCER referee who suffers from COPD (Chronic Obstructive Pulmonary Disease) is inviting other people affected by the disease to join Tallaght’s COPD Support Group, during COPD week.

Phil Meehan, 62, is a familiar face to people in the area through his work as a referee, and he was diagnosed with the condition when he collapsed while refereeing a match two years ago.

COPD, which mainly affects smokers, is a disease which makes it hard to empty air out of your lungs, which can cause shortness of breath and tiredness, and can in some instances cause people to avoid leaving their homes.

Phil, who lives in Tallaght, told The Echo: “People that suffer with COPD, they’re confined to their houses – there’s no outlet for them.

“If we can get the support group going we could go to Wexford for a day, or have a game of bowls, we could organise a fun day out.”

Speaking about plans for the support group’s upcoming meeting this month, Phil said: “We’ll have a chemist who will come in and show us how to use our inhalers properly, and another person will be coming in to give us an exercise class.”

Physical exercise is a key aspect of managing COPD, however it can be difficult for sufferers to engage in as a result of their frequent shortness of breath.

Nicky Coules, who was a People Before Profit councillor for Tallaght South, resigned from his position in the council last September as a result of ongoing health issues related to COPD.

Nicky said: “While COPD prevents me from fulfilling my role as a councillor, it is a manageable condition.

“I’m knocking on the door of 70-years-old, but I still have something to contribute.

“This group has great potential, it just needs people to get involved.”

The support group is open to COPD sufferers and their families from Tallaght and surrounding areas.

They will be holding a meeting in the County Library, Tallaght on Thursday November 16 from 2.30pm to 4pm, to find out more about the group you can contact Phil on 086 060 0968.

NEWER POSTMan allegedly told Garda that he would ‘wipe the floor with him and destroy him’
OLDER POSTTallaght Person of the Year: And the nominees are…