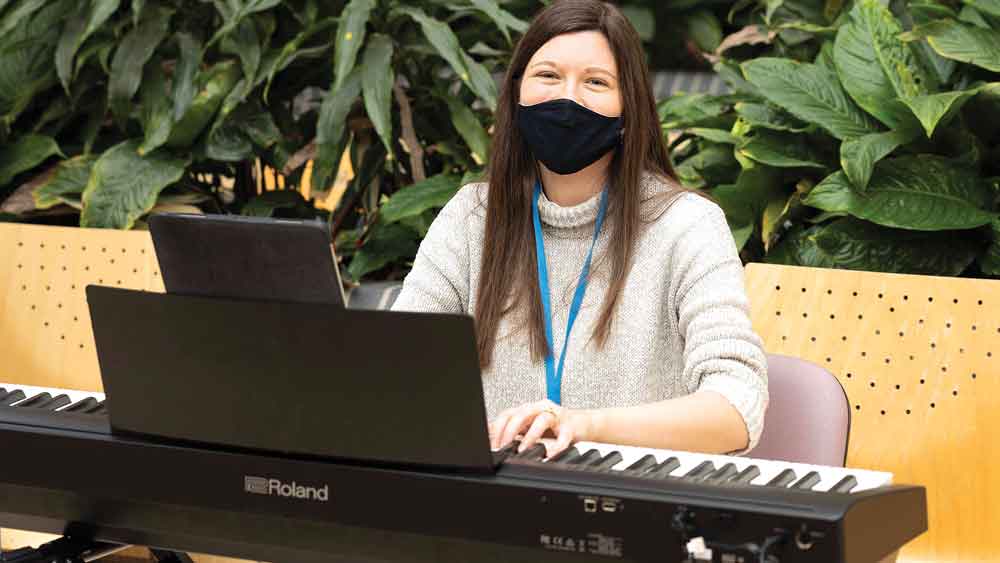 An interactive music programme called Soothing Sounds has been reintroduced to Tallaght University Hospital (TUH) in recent weeks, after going on hiatus as a result of the pandemic.

First introduced to the hospital’s paediatrics service in 2017, the programme has now been redesigned and is bringing live music to adult patients in the hospital.

Delivered by TUH’s musician-in-residence, Dr Sophie Lee, the programme brings music to the bedsides of patients and also in group settings and collaborative, interactive environments in the hospital.

Dr Lee told The Echo about the multi-layered, positive impact that Soothing Sounds has on patients’ wellbeing, and the sense of satisfaction that the programme gives to her as a musician working in healthcare.

How would you describe Soothing Sounds?

During each Soothing Sounds session, I play music that aims to connect with patients and draw them out of themselves.

The music is a varied blend of genres, such as classical, pop, folk and Irish traditional. It seeks to reduce stress in the environment, promote well-being and help patients take their mind off things.

How did your involvement in Soothing Sounds come about?

I began in TUH as a volunteer musician in 2015 and performed piano in different areas of the hospital. In 2018, I applied to become musician-in-residence and deliver Soothing Sounds in TUH’s paediatrics service.

The initiative ran in TUH’s paediatrics service until the pandemic began, what did you find most fulfilling about involving the children in the hospital wards in the project?

The most fulfilling aspect of involving children in the hospital wards was witnessing the positive transformation of their moods.

The sessions provided an opportunity for them to smile, laugh, release energy and have fun. We sang together and I brought in a wide range of colourful percussion instruments and encouraged them to engage in musical play, and to use the instruments to respond to, or accompany, the songs.

They typically became happier and more relaxed over the course of the sessions.

Over the years, what impact have you seen Soothing Sounds have on patients?

From children to adults, the impact has been positive.

Music has the ability to change the mood within an environment instantly.

It provides patients with an opportunity to be themselves, to tap along, sing or chat with others in a friendly space.

Conversations can develop that give a different insight into the patient or staff member.

You became TUH’s musician-in-residence in 2018, what did it mean to you to be selected for that role?

I was delighted to become musician-in-residence in TUH.

Delivering music sessions in TUH inspired me to undertake a PhD in music and health at the University of Limerick, supported by the Irish Research Council.

The role gave me the opportunity to put this learning into practice.

Every performance has its own unique engagement and reaction.

I have also performed music on the wards, units and within the hospital atrium.

Being involved in delivering performances to patients and staff at Christmas time is something very special too.

Soothing Sounds was adapted for adult patients and has been rolled out again in recent weeks.

How do you feel about the return of Soothing Sounds to TUH?

Adapting Soothing Sounds for adult patients has given the programme a whole new dimension.

Patients and staff have been enthusiastic and supportive.

It is wonderful to perform live music again in TUH.

What do you, as a musician, find most fulfilling about running Soothing Sounds?

Witnessing the reactions and engagement from patients and staff first-hand has had a positive, lasting effect on me as a musician working in healthcare.

Soothing Sounds is a flexible, adaptable, patient-centred programme and is open to spontaneous musical interaction.

As a musician, I love that every session is different.

One week I might have a group of patients who are full of energy and eager to have a singsong together, and another week I may have a group who prefer to listen to or chat about the music.

I have found that the programme stimulates conversations between patients and staff members, and provides opportunities for social connection in a clinical environment.

Soothing Sounds is supported through funding from the HSE and the Meath Foundation.