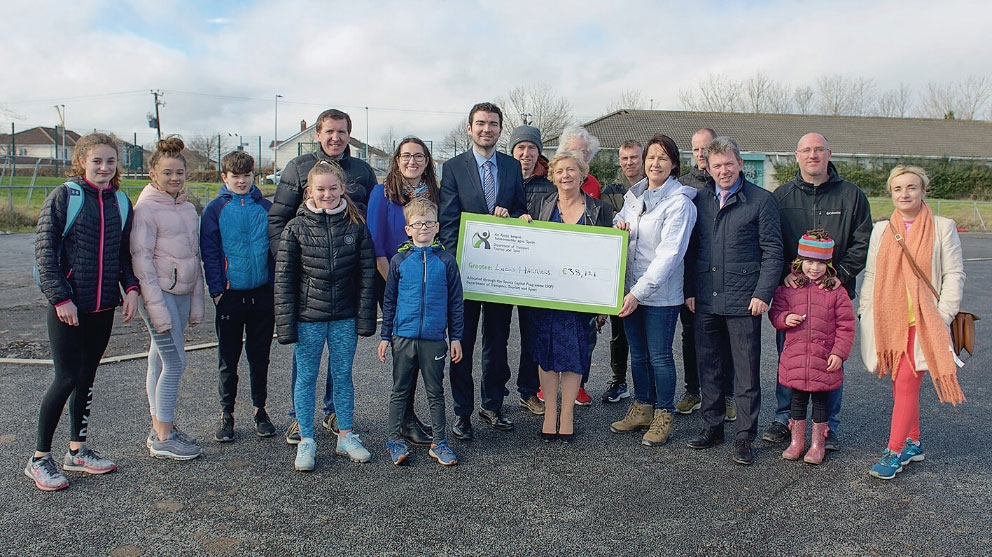 LOCAL sports clubs received a massive moral boost last week when they showcased their developments to Minister of State at the Department of Sport, Brendan Griffin.

All clubs received funding from the Sports Capital Grant Programme in recent years, with Lucan Harriers starting construction on a new €600,000 running track in January last year - €400,000 of which was fundraised.

After the builders contracted to build the track, went into administration in April, Harriers found themselves in limbo until construction re-commenced in November.

Now currently tarmacadamed, the running club find themselves on cloud nine as they wait for the temperatures to rise so they can lay the final synthetic layer on the track, with construction expected to conclude in May.

“It was a great opportunity to fill them in and show the minister the progress on the track to date,” said Marie Collins, Lucan Harriers chairperson.

“The next phase would be that we’re also hoping to put in for a €75,000 grant to develop the D-Area and long jump in-field, so that we will be able to hold track and field events.

“The minister drove in through the local area, after being over with Lucan Sarsfields, so he would have seen all the housing and schools on the way here and we’re hoping that he will see the need for this next phase because we do have a lot of members – [his response] was encouraging.”

With the seniors currently training on the surrounding Lucan roads, Ms Collins expressed her concerns with the younger members of the club as they continue to train in rented facilities.

“The children are a different matter altogether, we have 180 children with the club and we were lucky enough to have a few members at the Dublin Indoor Championships last week,” she said.

“We’re currently hiring facilities from Weston Hockey Club and Scoil Mhuire, but we can’t help but wonder how many members could have been at the Indoors had we had our own facility.”

Over in Rathcoole Boys FC, the minister observed the €142,000 enhancement of their astro-turf pitch with Deputy Fitzgerald praising the work on the facility.

She said: “This is a very important facility to an increasingly growing community – and I want to congratulate Dave Hennessy and all in Rathcoole Boys for their sterling work.”

Deputy Fitzgerald also went on to praise both Round Towers and Lucan Sarsfields for showing minister Griffin their proposals and history.

“I was very grateful to Alan Milton, Director of Communications and local Round Towers GAA volunteer for showing the Minister the site for the proposed all-weather pitch, which is being supported by the club, Gaelscoil Chlain Dolcain and South Dublin County Council.

“I would also like to commend the board members of Lucan Sarsfields GAA (€150,000) for their detailed presentation about the club.”