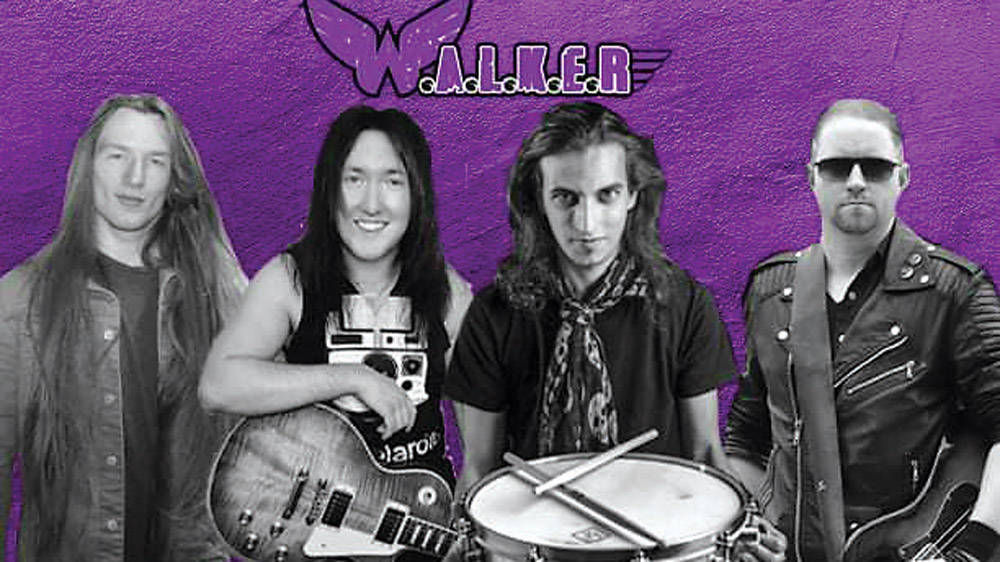 Rock band WALKER, who have previously worked with multi-platinum album producer Michael Wagener, best known for his work with Metallica and Queen, are gearing up for the release of their new EP.

The four-piece, consisting of frontman and Firhouse native Glen Walker, guitarist Kelan Hughes, drummer Ali Cruz and bassist Pete Jordan, set up the band in 2017 with the aim of bringing rock to a mainstream audience.

Alongside their passion for recording music, the band are also dedicated and energetic performers who are currently preparing to play a headline show in Fibbers on Friday, April 22, to coincide with the release of their second EP ‘Spreading the Disease’.

Frontman Glen Walker told The Echo about how the band felt about releasing the follow-up to their well-received debut EP, 2019’s ‘Bringing Rock Back’, what the process of putting together the new EP was like, and what gig-goers can expect from their headline show.

You released your debut EP ‘Bringing Rock Back’ in 2019, which was produced by Michael Wagener and physical copies of it sold out in Osaka, Japan, within ten days. What was that experience like for you?

Those debut EP sessions were amazing. We’ve been so eager and ambitious, not only to record music we strongly believe in, that resonates with us, but on top of that, to work with the very guy that was behind the control board for Queen and Janet Jackson, just speaks volumes.

I think it says that we’re doing something right. And we do not take it for granted.

Following the runaway success of your debut EP, did you feel much pressure when you were working on your new, follow-up EP ‘Spreading the Disease’?

Not at all. We were so excited to get back into the studio and begin recording again.

Personally, I feel proud and excited knowing that the following and fans we have gained since the first EP are going to love this, since they liked the initial release.

If ‘Bringing Rock Back’ was the starter, ‘Spreading the Disease’ is the main course!

What was the process of putting ‘Spreading the Disease’ together like?

I wrote and recorded a rough version of the title track in 2019, I believe. Our lead guitarist, Kelan, took it and refined the chorus and speed of the song.

So it truly was a team effort. There are some stand-out songs that Kelan wrote, like ‘Make It Work’, which he sings lead vocals on.

Seeing the band and our producer Michael Richards after it had been a while, was a breath of fresh air. Everybody in the studio was having a blast. There were smiles on all of our faces.

How do you feel about releasing your new EP, and what response do you hope to get from listeners?

I feel very excited. I’m so proud of this band and our work. Holding the CD in my hands on release day will be the ultimate pay-off. My goal is that listeners enjoy it.

I have a strong feeling they will, as it’s the best material we’ve recorded, in my opinion.

Do you have a favourite song on the EP?

That’s a difficult question, as the answer always changes. As of today, I’d have to say ‘Beautiful Woman’. It’s a song I wrote over 10 years ago and the band were eager to include it.

There’s some lovely sounding acoustic guitars and piano layered on the track, that I had the pleasure of recording.

Radio Nova have been kind enough to keep it on rotation and that means quite a lot. The song is very sentimental to me and I’m quite proud of how it turned out.

You’re playing a headline show in Fibbers later this month, how are preparations going for the show?

We’re hungry to play. We’ve played a few gigs recently, but they were just warm-ups. This is going to be the show of all shows.

We’re rehearsing and going over the setlist, making sure to keep everything fun and exciting. Life couldn’t be better.

What can the audience expect from a WALKER gig?

A bombastic, exciting, rock’n’roll party! Some refer to it as a show. It’s a feel-good celebration for everyone that loves music and a good time.

We love keeping the live show energetic and entertaining – always giving you something to look at while we sing and play. If you like Bon Jovi, Guns N’ Roses or Van Halen, this is the gig for you.

Where can people go to find out more about WALKER?

Our new EP ‘Spreading the Disease’ will be available on Spotify, Deezer and all streaming platforms on April 22.

Physical copies and merch can also be found HERE.