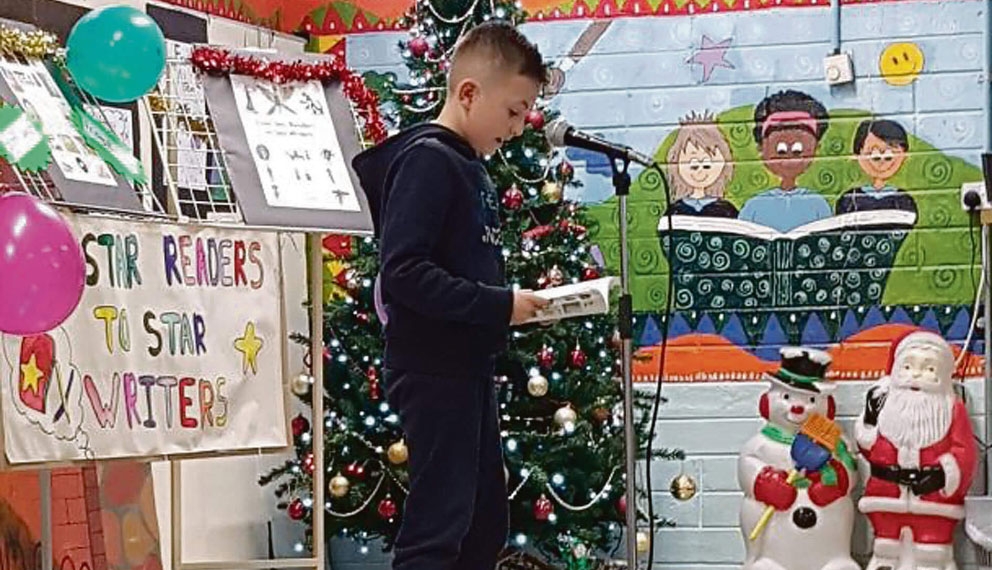 48 short stories were compiled by three sixth class groups in a short four-week period that culminated with the official launch by Emu Print Publishing on Friday, December 14.

Dylan Brennan doing a reading at the launch

At the launch in the school, Kathryn Crowley from Emu addressed the students and parents alike before some of the now published authors read extracts from their works to the spellbound audience – and signed copies of their new book for fans.

Regina Reilly, one of the class teachers in St Ronan’s said: “It was absolutely wonderful and the children were so excited to get it published by Emu. They just can’t believe that their name is in print with their very own book – it’s brilliant.”

Over the course of 121-pages, readers get an opportunity to experience a vast array of stories from the students that also helped design the cover of ‘From Star Readers to Star Writers’.

Each participating class delegated a team of 10 students to make up the design team, and they all worked tirelessly round the clock to ensure they made their deadline set by Emu to make sure it was out in time for Christmas.

The name of the book is derived from the ‘Star Reading’ programme that was set up by deputy-principle Mary Fitzpatrick, that sees students introduced to the reading and writing scheme in third class.

Ms Reilly, who read every draft submitted by her students, helped guide them towards the final draft of their stories.

“We didn’t work on anything else for the four weeks, it was very busy process to make sure we made the deadline but it all paid off,” she said.

“The launch was brilliant; the kids were a bit nervous getting up on stage and reading in front of everyone but it went very well.”