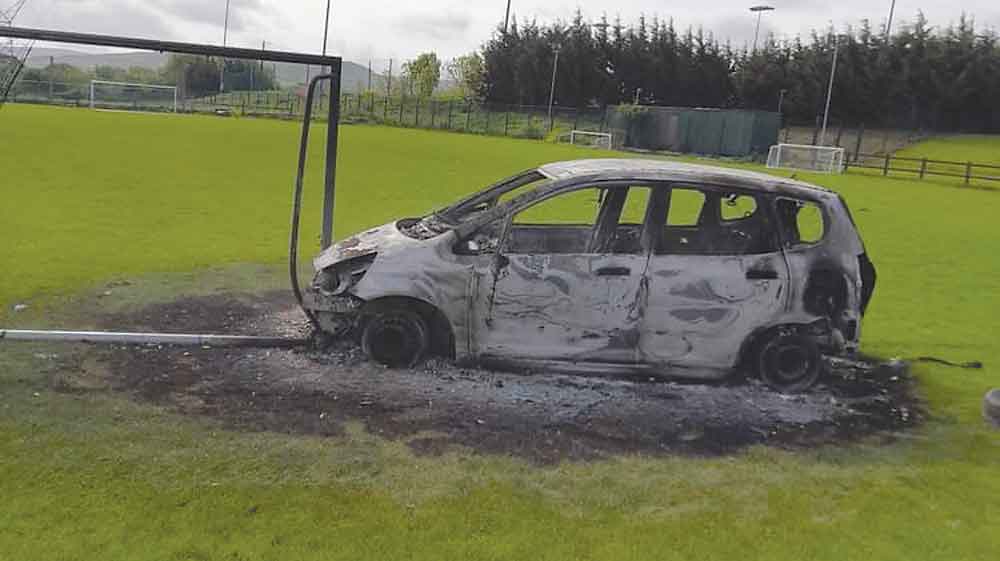 The stolen car burnt out on the pitch in the early hours of Wednesday morning, May 18

Stolen car burnt out on pitch causes €20k worth of damage

DAMAGE of approximately €20,000 was caused when a stolen car was burnt out on a juvenile soccer pitch on Killinarden Hill and a tractor used by the club was damaged in the early hours of Wednesday morning.

The pitch is used by Sacred Heart Football Club, whose members expressed their shock and disappointment at the wanton vandalism they encountered when they went to the pitch on Wednesday, May 18.

A stolen car was driven through the fence that surrounds the pitch, which is the lower pitch on Killinarden Hill, with the driver then joyriding around the pitch.

The car was then used to ram a shed that contained the club’s tractor, which the assailant then stole and used to ram the club’s containers, causing thousands of euros worth of damage.

The car was then burnt out adjacent to a goal post on the pitch, while the tractor was damaged to such an extent that club members say it’s beyond repair.

Speaking to The Echo on the phone while clearing up the debris left behind and attempting to move the badly damaged tractor, founding member of Sacred Heart FC, Joe Mahon, who also carries out grass cutting for the club’s pitches, expressed his frustration at what had happened.

“When I went up this morning, I saw the car was burnt out on the pitch, but I didn’t dream of the tractor shed being broken into,” he said.

“I had been looking at the pitch, and then I saw the tractor – it was battered. “I was shocked that anyone would do that.

This is the first time anything like this has happened to us.

“They rammed the tractor shed with the car, then they used the tractor as a battering ram to try to get into our containers and tool sheds.

“They’ve done serious damage to the tractor and the pitch, and now there’s a full tank of green diesel all over the containers [from the tractor being rammed into them].”

The club has approximately 300 members, including a strong juvenile section which saw success over the weekend when the Under-12s team won the C1 Dublin and District School Boys’ League.

The club had planned to hold a medal presentation ceremony on that pitch next month, as that’s where they’ve always held those ceremonies and they haven’t been able to do so for the last two years as a result of the pandemic.

Now the plan to hold the ceremony on the pitch has been shelved, as have plans for matches for the juvenile section on that pitch for the foreseeable future.

Kieran McDonagh, head of Sacred Heart FC’s schoolboy section, said: “That pitch is used by all of our junior teams, from the ages of five up to 14, four nights a week.

“Now the pitch has been damaged, and we can’t even cut the grass back because they destroyed the tractor.

“I don’t know what’s going through these eejits’ heads when they do stuff like this. For some mindless individual to come up here and do this, I can’t understand it.

The dismay at what has occurred is being felt around the Killinarden community, according to local Sinn Féin councillor Dermot Richardson.

Cllr Richardson said: “People are shocked at the damage that’s been caused.

“It’s disgraceful for that to happen to a community-based club like Sacred Heart.

“If anyone has any information about this, they should contact the club.

“And the person who did this should reflect on what they’ve done.

“It’s a schoolboy pitch, and the kids are suffering because of the damage that’s been done.”

The club said they’ll use their Astro pitch in the interim, as they expect it’ll take several months for the affected pitch to be playable again.

They’re unsure of how long the clean-up operation will take, but they are heartened by the support the community has shown and are keen to keep building the club in spite of the setback.

“It’s hard to take for the volunteers, but we will come back from this,” said Mr McDonagh.

Reflecting on the damage caused, Mr Mahon remarked: “We’re dealing with a low life who set fire to a car on a pitch, destroyed our fence and damaged our tractor and containers.

“It’s going to set the club back, but there are good people in the club – and we have to keep going for the community. We’re a community club.”

A garda spokesperson told The Echo on Wednesday that they are investigating the taking of a vehicle from a residence in the Tallaght area which was later recovered.