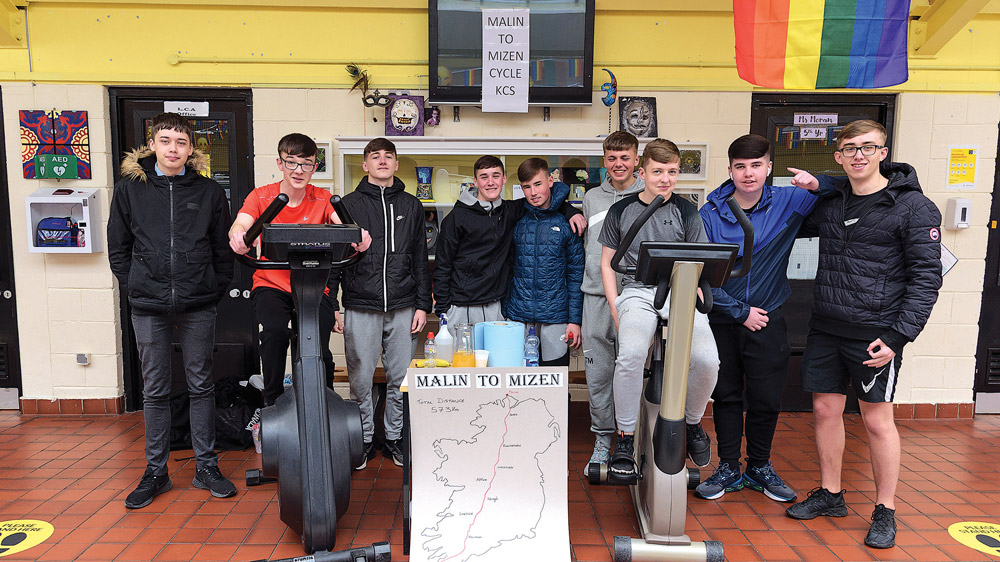 Students cycle from Malin to Mizen Head for football club

STUDENTS from Killinarden Community School took on a virtual cycle from Malin to Mizen Head and back to raise money for the resurfacing of their local club Sacred Heart’s FC all-weather pitch.

The students took turns cycling on the gym bikes during last week and recorded their distances as part of wellbeing week at the school, with proceeds going towards the improvements of Sacred Heart FC’s pitches.

“We have three football teams at the school who use the Sacred Heart facilities near the school, and we have been using their facilities for over ten years and they never charge us or anything like that”, said Johnny Keenaghan, careers teacher and sports coach at Killinarden CS.

“This summer they are getting the pitch resurfaced, so we just thought that we would give something back to the club.”

The fundraiser took place over a week, as the students racked up the distance of cycling between Malin to Mizen Head and back up to Malin Head by Thursday evening.

“We had two lads on the bikes every hour, and they would record how far they cycled within the hour before switching. It kind of turned into a competition of who could cycle the furthest”, John joked.

“We did the cycle and then decided then that we would finish up at the school, so they cycled from Malin Head to the school on Friday. We set up a GoFundMe page and we had a donation box as well and donations have been flying in, which is great to see.

John added: “It will be great to hand the cheque over to the lads and show our appreciation for everything that they’ve done for us over the past few years.”

Donations are still being accepted for the fundraiser and the school will be handing over the cheque to Sacred Heart F.C in the coming weeks.

To donate you can go to ‘Malin to Mizen Head – KCS Cycle’ on GoFundMe.