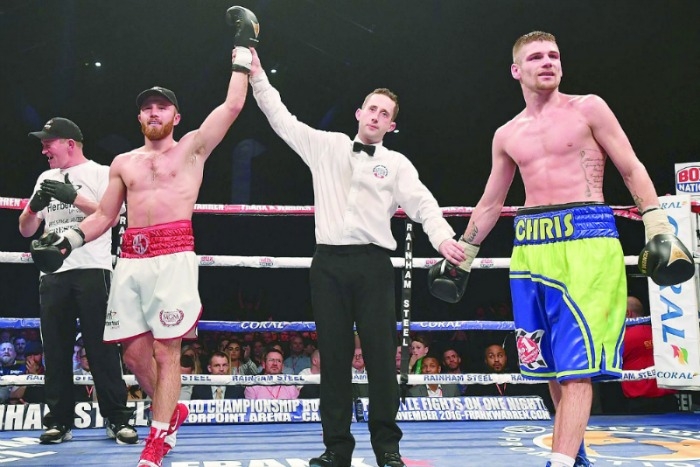 PHIL SUTCLIFFE Junior’s bid for a major title fight took a huge step forward after he overcame the highly-rated Chris Jenkins in a strength-sapping ten-rounder on the Boxnation show in the Titantic Exhibition Centre in Belfast on Saturday.

Having shipped just one loss in the 18 pro fights in the lead-up to last weekend’s showdown (and that coming in a clash with Tyrone Nurse for the British Super Lightweight title), Jenkins was undoubtedly Sutcliffe’s biggest test so far.

It was the Crumlin man who looked the more lively early on, downing his Welsh opponent in the opening round and catching him with further shots.

Yet Jenkins was looking to return to winning ways and mounted a comeback from the midway point in the bout, but Sutcliffe finished strong to get the decision.

“I really enjoyed it, but I was very tired after it. To get the ten rounds was a great learning experience,” Sutcliffe told The Echo.

“After the fifth round I got a little bit tired, but then came back into it by the eighth round. In the tenth I gave it a big push.

“I think I underestimated him [Jenkins]. I didn’t think he would last, but he was very tough. He had a great engine on him.

“The two of us just didn’t stop and it became a battle to see who would give up first, and neither of us did.

“It would have been nice if there had been a title at the end of it. It was a big fight and a great exper-ience, so onwards and upwards from here,” insisted the Crumlin man.