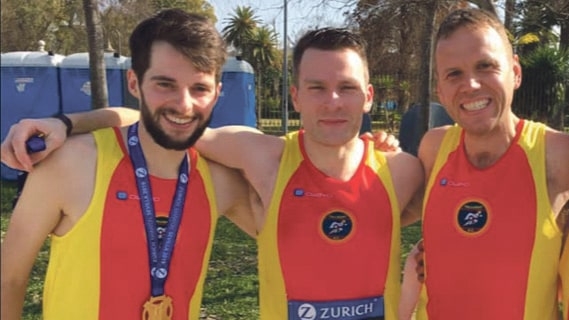 MICHAELA Delany, who has had two kidney transplants, is helping to raise awareness of a Tallaght Athletic Club (TAC) virtual challenge for the Irish Kidney Association (IKA).

Living in Clondalkin, Michaela (20) had her first kidney transplant at the age of two and her second in 2015, when she received a kidney from her mam Liz.

A media student in Ballyfermot College of Further Education, Michaela has given her support to a Tallaght Athletic Club fundraiser for the IKA, which will see three of its members virtually run the Boston Marathon in under three hours.

Michaela’s dad Dermot is a member of the Greenhills Road club, with the 20-year-old helping to raise awareness of the event across the community and through social media.

Due to Covid-19 measures, the Boston Marathon has been cancelled this year, with a virtual marathon being staged in its place.

Three Tallaght AC athletes, David Callaghan, David Fitzpatrick and David O’Callaghan have qualified for the event and are now aiming to run the virtual event, raising funds for the IKA in the process.

Other members of the running club will also take part in the challenge as a relay team.

Michaela told The Echo that the IKA was selected as a number of Tallaght AC members have family directly affected by kidney disorders.

“The IKA and its work is massively important,” Michaela told The Echo.

“Alongside helping the club to raise funds for the IKA, I hope to help raise awareness of the event and the work of the IKA.

“Carrying a donor card is also something I encourage people to do as well.”

Michaela has no memory of her first kidney transplant, but remembers starting to fall ill when she was 14.

“I was sitting my Junior Cert just a few weeks before I had to go on dialysis,” Michaela said.

“I was lucky, I was only on dialysis for four months [before my mam donated a kidney].

“I just remember feeling so healthy after.

“Beforehand, I was on dialysis three times a week and was just so sick and had no energy.”

Michaela is now putting her time into raising awareness of Tallaght AC’s fundraising event, especially after the IKA had to cancel its own annual fundraising event due to Covid-19 restrictions.

The three Daves will take part in the sub 3 virtual Boston Marathon on Sunday, September 13 at 9am.

To support the club’s marathon challenge and the Irish Kidney Association, visit TAC sub 3 Boston Marathon in aid of IKA Facebook event page for a link to the GoFundMe page HERE.

Information on the Irish Kidney Association can be found at www.ika.ie.

NEWER POSTCoronavirus: No further deaths and 93 new cases
OLDER POSTSDCC Dev Plan: What will it take to leave cars behind and walk or cycle?