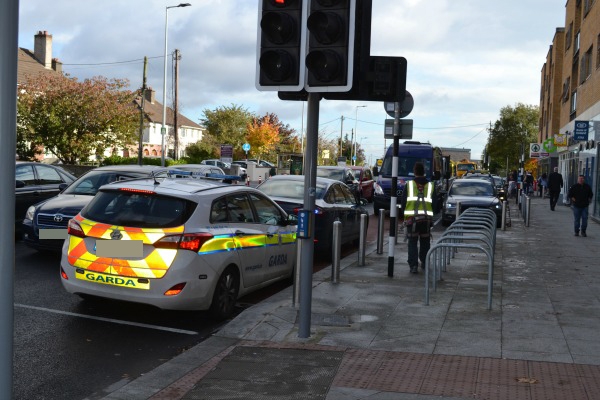 Gardai in Tallaght continue to investigate a cash in transit robbery that took place outside the Bank of Ireland today.

The incident occurred just before noon and involved two men who made their getaway in a silver Peugeot car after one the robbers grabbed the cash box from a security worker.

One eyewitness, speaking to Joe Duffy on Liveline this afternoon said he spotted a man crossing the road wearing a hoodie, baseball cap and something pulled up over his face.

Patrick said he had been stopped at the traffic lights next to the bank when he noticed the security van pulling up, as he explained.

He said: “We were driving up towards Tallaght Village, sitting in traffic beside the Bank of Ireland when the security van pulled up.

“Suddenly the guy I was driving with said, ‘would you look at your man across the road’.

“We presumed he must know the guard.

“He sprayed him and grabbed the cash box the guy was holding, then got away. I don’t think he even ran.

“At first I thought he was messing but then I saw the spray.

Patrick went on to say how the security guard who was sprayed in the face had no chance, and how a member of the public used his van to try and stop the thieves from getting away.

His efforts halted the raiders from immediately vacating the scene, but they eventually forced their way through and headed towards Glenview.

Anyone with information is asked to contact Tallaght garda station on 01-6666000.