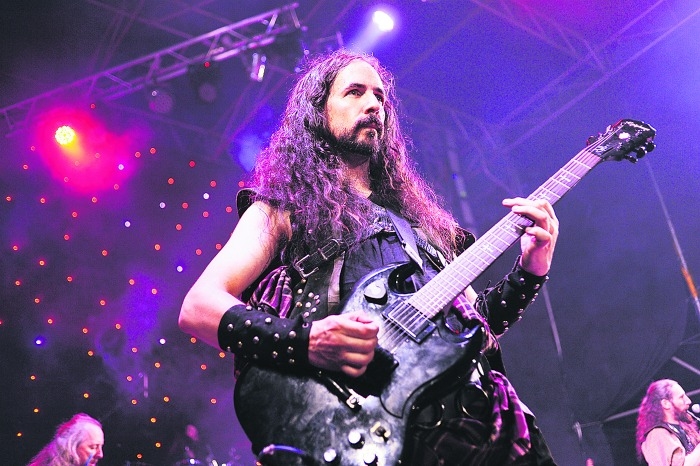 A COPYbook of lyrics penned by a Tallaght musician when he attended Killinarden Community School more than 25 years ago has been inaugurated into the Irish Rock ’n’ Roll Museum in Temple Bar.

Growing up in Killinarden, and now living in Jobstown, Keith Fay (40) is the lead singer of Cruachan – a band, which, in existence for more than 20 years, has been credited with creating a whole new genre of music, Folk Metal, which is a blend of Celtic history, mythology, traditional Irish music and metal.

Performing to sell-out audiences the world over, Cruachan has this month been inaugurated into the Irish Rock ’n’ Roll Museum in Temple Bar – with a number of the band’s memorabilia now on display alongside other Irish greats, including Rory Gallagher, Thin Lizzy, U2 and Van Morrison.

The only original member left in Cruachan, Keith, who plays the electric and acoustic guitar, keyboard, bouzouki, mandolin, banjo and bodhran, took some time out to speak with The Echo.

What inspired you down the road of folk metal?

I got into metal music at a fairly young age, 12 or something like that. I liked all the big names of the time such as Metallica and Slayer. I was into more obscure stuff too like the black metal of the Scandinavian scene. I was always excited by any deviation of the standard guitar, bass and drums set up. I heard of a death metal band that had a full-time keyboard player, Nocturnus, and I loved that.

Skyclad from the UK released an album in 1991 that had one or two folk parts with a violin. I was always into Irish music as well and the idea formed to marry the two styles full-time. Something that had never been done before. Sure, there have been bands that had some folk parts here and there such as Syclad, but also the likes of Iron Maiden and Thin Lizzy, to name just two. So, that’s where it came from.

You’ve been hailed as one of the founders of folk metal, what is that?

Well, it’s pretty straightforward. It’s a fusion of metal music and folk music. More in-depth, it can be any type of metal mixed with any type of folk music and within there are various sub-genres. We are often described as “Celtic Metal” due to our use of only Irish folk music. There are bands from all over the world that combine their country’s folk music into metal – a great band from Mongolia, Tengerr Cavalry, mix Mongolian tribal music with metal, it’s bizarre, but really good.

Do you remember the first song you learned to play on the guitar?

I think it was Napalm Death’s “Scum” haha. I learned to play on a beat-up acoustic that my dad owned. I used to sit the guitar on my lap and play only with my thumb on the fret board.

What was the first album you bought? Do you still listen to it?

You guys are huge outside of Ireland, what have you been up to in recent months?

We’ve played a lot of big festivals, the highlight of 2016 has been Hellfest in France. There was 180,000 in attendance and it was headlined by Black Sabbath – it was an amazing weekend. We also played Estonia for the first time at the Hard Rock Laager festival. I’m answering these questions for The Echo in Athens, Greece, getting ready for our first show ever here as well. The venue is sold out so we are looking forward to a great party here with some dedicated Cruachan fans.

Cruachan has been inaugurated into the Irish Rock ’n’ Roll Museum, how does that feel?

Amazing. We know how big we are outside Ireland and have a lot of respect out in the world, but unfortunately we are more or less ignored by the Irish media. They are too caught up in their X-Factor / Pop music bubble that is unique to Ireland and the UK. Anyway, when I was contacted by the curator at the museum he told me that he is very aware of our contribution to Irish music and the perception of Irish music from the international community. They would regularly have tourists come to the museum and ask why Cruachan is not there, so it is a really proud moment to see that some of our stuff will be there next to U2 and Thin Lizzy.

What memorabilia will the band have on permanent display?

I donated the keyboard that I used to write every Cruachan album to date, you could say that it is the keyboard that spawned Folk Metal. I also gave my copybook from Killinarden Community School that I used to write some original lyrics. It is the school copybook of a 15-year-old, so it’s full of stupid sketches as well as some lyrics handwritten from our first album. There is also the actual reel from our The Middle Kingdom album as well as some posters and back-stage passes from some memorable shows.

You’re the only original member left of Cruachan, looking back over the past 20 years is there any stand-out moment?

Ah, there are so many – our first ever show in Russia would be one. I think it was in 2003, it was our first-ever live show outside Ireland and we have no idea how appreciated we were. We had a press conference and were introduced to fans that travelled from as far away as Germany to make the show. Another memorable one is in Russia again, years later, this one is bizarre. We were on a night train from Pskov to Moscow. We had a few beers and were a little loud. Our cabin was beside some soldiers who complained to the train security. Next thing we know the train has stopped and Russian police come to our cabin and point AK-47s at us. The terror!

How did you get out of that situation?

Our Russian tour manager goes outside to talk them, it wasn’t until the end of the tour we found out that he explained to the police that the owner of the tour agency is some big-shot gangster in Russia, the police came in and apologised to us and told the soldiers to stop complaining. While all that was happening, Russian bandits stole the engine car of the train. They actually kidnapped the driver, stole the engine car, while soldiers and police where on the carriages. Still can’t believe that actually happened, but it did.

What are your memories of growing up in Tallaght?

I loved growing up in Killinarden and never had any bad experiences and I didn’t think twice about buying my own home in Jobstown where I live happily today amongst wonderful friendly neighbours.

If you had any words of advice for aspiring musicians, what would you say?

Anyone can be a musician and I would recommend if you have the slightest interest to try get into it as soon as possible. Tallaght has always been criticised in the past for being created too quickly and with little amenities for the vast population. Maybe things have changed today, but when I was growing up, that was certainly the case. I got into music, that occupied a lot of my time. Music, whether it is playing or listening, is one of the greatest things to do. As for becoming a successful musician, that is a different story. How do we even measure success these days? Anyone can release an album now and record stuff at home. Best advice I can give though would be to practise, and practise again and again. It’s a bit of a cliché but it really is true.

What’s up next for Cruachan?

Our first show in Spain is later in the year then we play on the 70000 Tons of Metal, which is on a cruise ship in the Caribbean. That’s like the Holy Grail for metal festivals – only top bands are invited to play, 60 bands, 2,500 fans on a cruise ship. What more could you want?? We will also be recording our new album in early 2017.

NEWER POSTAl Porter: “I feel so keenly the stress and chaos of life and the madness of it”
OLDER POSTPlanning go-ahead to develop showrooms and build extension