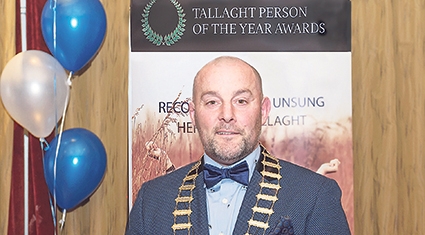 Looking back on his term as Tallaght Person of the Year, Simon Sweeney believes that the role opened his eyes to how “special” the area really is – and the impact that positive mentoring is having on Tallaght’s younger generation.

The top honour of Tallaght Person of the Year 2016 was last year awarded to Simon for his work with the Kiltipper Ramblers, a group which not only encourages people to get out walking and exploring, but reconnects them with the beauty that lies here in Tallaght, at the foothills of the Dublin Mountains.

Living in Ellensborough, Simon is an energetic and influential supporter of the Dublin Mountains. Over the course of the past year, the Kiltipper Ramblers brought more then 700 primary school students on educational walks in the Tallaght hills.

When asked to describe his term as Tallaght Person of the Year, Simon said: “It’s been a huge learning experience.

“I thought I knew Tallaght but the year was a huge eye-opener on how special Tallaght really is…and I still haven’t seen the half of it.

“The passion that people have for their community is unreal – there’s so many people volunteering their time to the community because they see it can help others and change people’s lives.”

He added: “An example of some of the work that really amazed me is what’s going on in West Tallaght with younger people.

“It was great to see how children react to positive mentoring in some of the clubs I visited like The Black Panther, and how this mentoring not only prepares them for life but connects them to their community and keeps them fit.”

Simon used his year as Tallaght Person of the Year to also reach out to the area’s younger generation and brought hundreds of school kids on tours of the Tallaght hills, which alongside teaching them a new way to keep active also educated them on local wildlife and how to protect it.

“What I love about the Dublin Mountains is that they are inclusive, there’s something for everybody regardless of their age, ability or fitness level.

“It could be an amazing photographic opportunity, a beautiful butterfly, watching wild frogs, or learning about our local history that inspires someone.

“We have an amazing asset on our doorstep and alongside meeting lots of different people and groups over my time as Tallaght Person of the Year, it was an honour to be able to use the role to help promote the Dublin Mountains.”

Simon will hand over his chain of office when the new Tallaght Person of the Year is revealed at a glitzy ceremony in the Red Cow Moran Hotel on Friday, November 17.

“I’m excited to see who’s next”, Simon said. “There are so many amazing people in our community to choose from.”

He added: “These people don’t do what they do for recognition but they deserve recognition and that’s why I believe Tallaght Person of the Year is so important.”

The nomination process has closed for this year’s awards, with organisers Tallaght Community Council (TCC) currently going through all of the nominations received – a list of which will be published in The Echo next week.