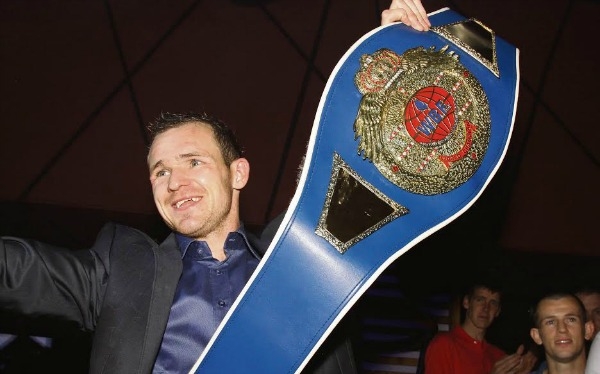 After 12 years in professional boxing, Tallaght’s Patrick  ‘Punisher’ Hyland has announced his retirement.

Hyland, a former national and WBF champion, lost what is now his last fight against Josh Warrington in July, having been beaten by Gary Russell earlier this year.

Patrick Hyland celebrating after his WBF title win in Dublin

Hyland’s professional record of 31 wins (15 by KO), 3 losses and no draws saw him box in some of the world’s most iconic venues, including Madison Square Garden.

His world title fight against Javier Fortuna was also a real highlight of his career, while he had some memorable nights in Dublin, including when he won the WBF title in 2011.

In a statement released today by the Tallaght man, he thanked all those who helped him throughout his career, especially his late father Paddy Hyland Snr.

His full statement reads: “After 24 years in boxing and 12 years to the day today that I made my professional debut the time seems right to announce my retirement from the sport I’ve loved my whole life.

“There are so many people who have helped me on my journey, first and foremost of course is my Dad.

“I owe everything to him, from day one he showed me everything I know and the last year has been so hard without him since he passed.

“There are so many other people I want to thank who helped me throughout my career including John “Jazzer” Farrell, Pat Ryan, John Noonan, Tommy Kelly, my brothers Edward and Paul, Brian Burke and many more!

“Big thanks also to my long term manager Brian Peters who got me everything I’ve asked for and more!

“Also to my trainers Tracy Patterson (who was like a second father), loved my time with you in NYC, Paul Cook and Packie Collins.

“It was great working with all of you and a thank you to my promoters Jess Harding, Snooki Boxing (Mike, Andy & Nicole) and Lou DiBella for providing opportunities throughout my career.

“Also a big thank you to my sponsors who helped me throughout my career.

“Fighting a guy I believe to be a future hall of famer in Gary Russell and another world class talent in Josh Warrington would have been difficult at any time but without my dad in my corner those tasks were made even harder.

The Punisher in action against Philippe Frenois in 2011
“However I can retire happy in the knowledge that I tested myself against some of the very best in the sport on the biggest of stages.

“Challenging Javier Fortuna for the World title on a massive card at The MGM Grand in Las Vegas and headlining a card at The Theatre in Madison Square Garden in New York are the stuff of most boxers dreams but I got to live it and I enjoyed every minute of it.

“I was lucky enough to win a few belts throughout my career to put on the mantel piece but pride of place goes to the Irish title belt I won in 2008 and the WBF title belt in 2011, both shows were at the National Stadium and I know my dad worked so hard to put both of the cards on so they hold a special place for me.

“I had great support over the years from family and friends who travelled the world to watch me fight and I’m truly grateful for all of that support and the valuable friendships I’ve made down through the years.

“Of course I can’t forget the women in my life, my Mam for all the years of doing my washing and to my wife Lorna for putting up with boxing over the past 10 years with me!

“It’s now time for me to focus on family and it’s getting bigger now that Lorna is expecting a baby brother for Callum.

“I’ll always miss the buzz of fight night and stepping through those ropes but the 6am runs on freezing, dark mornings in the middle of winter…not so much!