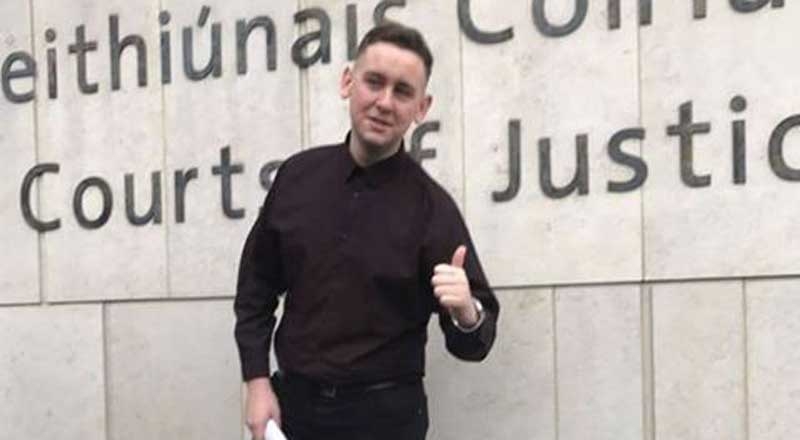 A DUBLIN youth found guilty of false imprisonment of former tanaiste Joan Burton during the Jobstown protest had his conviction overturned on appeal today, Monday December 4.

Jason Lester, 18, from Brookview Close, Tallaght, Dublin was aged just 15 when he took part in the protest in November 2014 and later ended up arrested, questioned and then put on trial last year.

He became the only person to be found guilty of false imprisonment of the former Labour leader and one of her assistants during the controversial protest.

However, today, following a three-year fight to clear his name he won his appeal against the guilty verdict.

In his non-jury trial last year at the Dublin Children’s Court the then 17-year-old youth had denied falsely imprisoning Burton and her advisor Karen O’Connell for three hours in cars at the Fortunestown Road in Jobstown in Tallaght.

The Dublin west TD and former Minister for Social Protection had been at a graduation ceremony at An Cosan adult education centre when a water protest took place outside. She and her advisor told the trial that they were too frightened to get out of Garda cars surrounded by people shouting abuse, throwing missiles and banging on windows.

Then aged, 17, he was found guilty last year following his trial which went on for a week at the Dublin Children’s Court but he was spared a custodial sentence.

He faced a possible two-year sentence however, on Oct. 21, 2016, Judge John King imposed a conditional discharge providing the youth did not re-offend in the following nine months.

The youth, now aged 18, an adult, appealed the verdict and the case was listed in the circuit court today.

Giollaoisa O Lideadha SC, defending, said the State’s application was that the appeal would not be opposed. He also said that though the appeal came from the Children’s Court, his client, who did not address the proceedings, was now aged 18 years.

Judge Patrick Quinn said he was allowing the appeal and agreed to grant legal aid to the youth’s lawyers who cited the complexity of the case.

In October charges against 10 of the 11 Jobstown water charge protesters were formally dropped at Dublin Circuit Criminal Court.

In June, six men, including Solidarity TD Paul Murphy, were found not guilty by a jury of falsely imprisoning the politician and her advisor following a nine-week trial.

Charges against a seventh man were dropped halfway through that trial.

In the Jason Lester’s trial last year, in the Children’s Court, the defence cited the right to protest and freedom of expression under the Constitution and the European Convention on Human Rights.

However, the trial judge John King held that these protections were not unqualified rights and were subject to conditions and penalties as necessary for public safety and disorder, crime prevention and protection of the rights of others.

The teenager had told gardai he was sorry for the stress he caused to Ms Burton, his trial was told.

Following the four days of hearing evidence and legal arguments, the teen, who could not be named at the time, was found guilty by Judge King who held it was “indisputable” that the former Labour leader and her advisor were detained against their will, and he said the teen was present throughout.

Videos obtained from Youtube, RTE as well as Ms Burton Ms O’Connell’s phone was shown during the lengthy hearing and the court heard evidence from the two complainants and garda witnesses.

However, the teenager had always contested the charges.

His legal team argued that it his was a right to protest case. They had also contended that the prosecution was “unprecedented” and a “recipe for totalitarianism” and that there was an agreement with gardai that protesters would march ahead of a car carrying the two women.

The youth had no prior criminal convictions and testimonials were furnished to the Children’s Court.

The trial judge had complemented the teenager on his realisation of the necessity for social justice and he noted the youth’s previous good record as well as work he has done in his community and for charities – including helping the homeless, for which he has received awards.

In relation to the charges against the youth, the trial judge said he noted from the prosecution evidence claims that he was first seen as Joan Burton walking to St Thomas’s Church holding a phone to her while saying “talk to us Joan”.

He said the teenager was “an active participant in the blockade of the unmarked car”.

He said the youth had a loud hailer and video evidence showed him shouting “shame, shame, shame on you” when he was at the back of the car. He said he had noted footage at various stages showed him in confrontation “or at least animated conversation with gardai”.

He noted evidence of a garda who said that at the church, a female shouted and the boy ran to the protesters and they surrounded the unmarked garda car.

Judge King said the next mention of the teenager in evidence was in the vicinity of a Garda jeep when he had a megaphone and was telling others to sit down. He was also chanting “no way we won’t pay” and the jeep was blocked.

The judge also said the teenager was gesturing to the crowd in a manner to suggest the he was trying to co-ordinate them. He had said the teen also handed the megaphone to another person who asked the crowd if they should let Karen O’Connell and Joan Burton go.

“In fairness,” the trial judge had also commented that he noted the teenager handed the megaphone to a female protester who asked crowd to stop throwing objects.