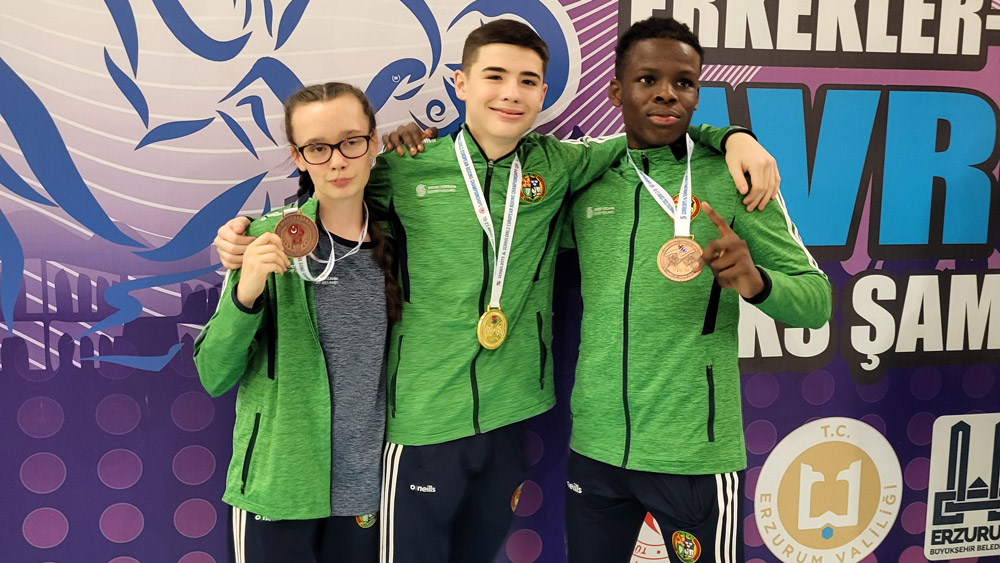 SACRED Heart Boxing Club pair, Brandon Geoghegan and Abbey Molloy, along with Jobstown BC’s Broderick Abudoire, are all returning home with medals from the European Schools Championship in Turkey.

While the former scooped gold after no less than five fights in the 50kg division, both Molloy (42kg) and Abudoire (63kg) each picked up bronze in their respective weight categories.

“Brandon really grew into the tournament and, while the fights got harder as he went along, Brandon got better and won better” said his coach at Sacred Heart, Mark Hanrahan.

“I’ve never seen a boxer with the will to win like Brandon. If he got caught with one punch, he’d come back with three” he said.

With 18 boxers competing in his division, Geoghegan knew he would have to dig deep if he was to go all the way and top the podium.

He ignited his campaign with a 5-0 victory over Israel’s Amin Mahbi and continued on to earn unanimous decisions in all of his remaining four contests.

Jakub Marcinow of Poland was the next to come undone at the hands of the Tallaght lad before England’s Paddy McDonagh was despatched in the quarter finals.

In the last four, Geoghegan surmounted the challenge of Italy’s Mattia Turrin, setting up a title decider against Akaki Basaria of Georgia.

“The Georgian was a southpaw and also had five fights, so he had a lot of confidence” said Hanrahan.

“But Brandon went out smart and was very good with his counter-punching, producing brilliant footwork and head-movement.

“He just let his hands go and didn’t miss any opportunity to catch his opponent with the counter-punch” he added.

Geoghegan’s gold-medal success followed hot on the heels of the bronze won by his clubmate Molloy, who chalked up a dominant 5-0 victory over Turkey’s Melek Ozdemir to ensure she would make the podium.

She was later beaten by the eventual gold-medallist from Armenia, Hamest Afrkyan, but will draw huge confidence from her superb first year in boxing, which has brought with it, a National Cadet Championship title and European bronze medal.

Meanwhile, Jobstown’s Abudoire produced some fantastic boxing on his way to bronze, starting with a 5-0 triumph over Moldovan champion, Vladislav Patesca against whom he dominated with his left hook.

That was followed up with a victory over Poland’s Bartosz Kuros that secured him a semi-final berth where he came undone against Germany’s Justin Kiz.

Also in action at these championships was Abudoire’s Jobstown clubmate, Faith Killeen who, despite a great effort, lost out to the much taller Bosnian champion in the 57kg division.