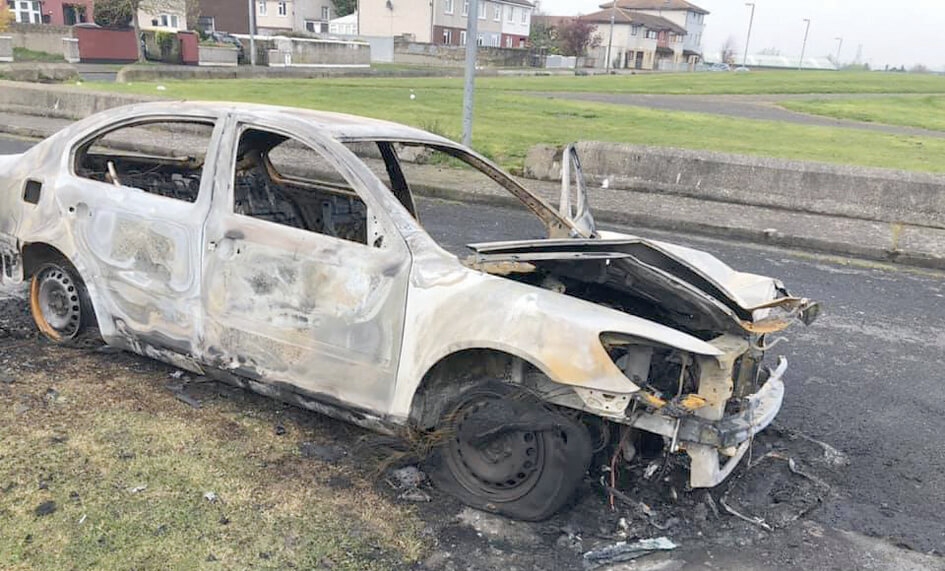 A TAXI driver was subjected to a violent hijacking in Avonbeg in the early hours of Saturday morning, where he was allegedly attacked by a couple and was stabbed with a meat skewer before they stole his car – which was later found burnt out in Brookview.

Shay McKenna (73) was dropping a female customer off at an address in Avonbeg and, as he was getting her change, a man and woman opened his driver-side door, with the man demanding that Shay hand over his money.

Shay told The Echo: “He stuck something like a meat skewer, like a wooden stake, into me. Then the adrenaline set in and I had him in a headlock.

“Then the woman – but I wouldn’t call her a woman, she was more like an animal – took the keys out of the car while I was struggling with the man.

“Then he dragged me out of the car. I was defenceless.

“I feel like the woman was the perpetrator. She kept saying ‘finish him off’ as I was being stabbed with the skewer.”

As these events unfolded, the woman in the car, Shay’s passenger, was screaming, and the taxi driver was later treated at the scene by ambulance personnel.

The car, which Shay had rented from the Clondalkin-based taxi rental company Autoclass Hire, was later found burnt out in the Brookview area of Tallaght.

Shay, who lives locally, said that he has struggled to sleep since the hijacking and that he is now experiencing symptoms of depression as a result of his ordeal.

“It’s hard to think that these people are still walking the streets,” he said. “I just hope that they’re caught and brought before the courts.”

Shay said he’s not sure when he will start driving a taxi again, but he said that he will never drive a taxi at night again as a result of his experience.

A garda spokesperson said: “Gardai are appealing for information following the hijacking of a taxi in Tallaght on April 6, 2019.

“At approximately 12:50am a taxi driver (male 70s) was confronted and assaulted by a man and woman after dropping a fare on Avonbeg Road.

“The man and woman overpowered him before driving away in his car.

“The taxi, a blue Skoda Octavia, was later found burned out in the Brookview area.

“The taxi driver was treated at the scene by ambulance personnel for minor injuries.

“No arrests have been made to date and enquiries are ongoing. Anyone with information is asked to contact Tallaght Garda Station on 01 666 6000.”