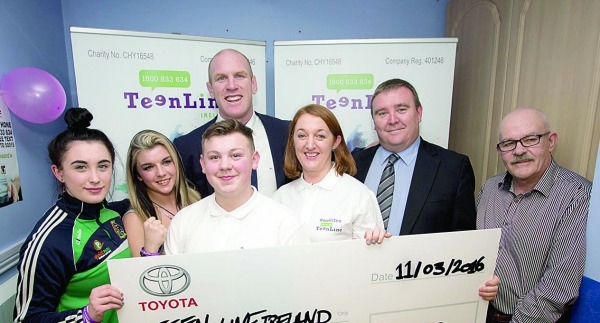 TeenLine Ireland get donation of €12,000

Based at the St Dominic’s shopping centre, TeenLine Ireland was established by Tallaght mother Maureen Bolger after the loss of her son Darren to suicide in 2003.

Maureen saw the need for a confidential service to help teenagers and young adults who may feel isolated, troubled or lonely, so TeenLine, which is a non-profit organisation, was set-up.

Receiving more than 24,000 calls annually, TeenLine is run by a team of trained volunteers who understand that young people need to be heard and they volunteer to listen – with TeenLine now seeking new volunteers to help staff its helpline.

The donation presented by Toyota Ireland, and the company’s brand ambassador Paul O’Connell, will help TeenLine fund general operational activity in schools nationwide alongside vital recruitment and training of volunteers – who are ordinary, members of the general public.

“The crucial work that the team at TeenLine Ireland do is not only very challenging, but it is also voluntary . . . and we are proud to contribute towards the recruitment and specialised training of volunteers who can make a massive impact on the lives of young people in Ireland.”

Thanking Toyota Ireland for its donation, the Chairperson of TeenLine Ireland, Declan Brennan, said: “The support Toyota Ireland is giving TeenLine is of great significance to us as it will enable us to visit many more schools to raise the awareness which our Helpline provides to so many teenagers and young adults all over Ireland.

“It will also ensure we can continue to recruit the many type of volunteers from helpline to fundraisers. TeenLine needs to continue to provide this vital service.”