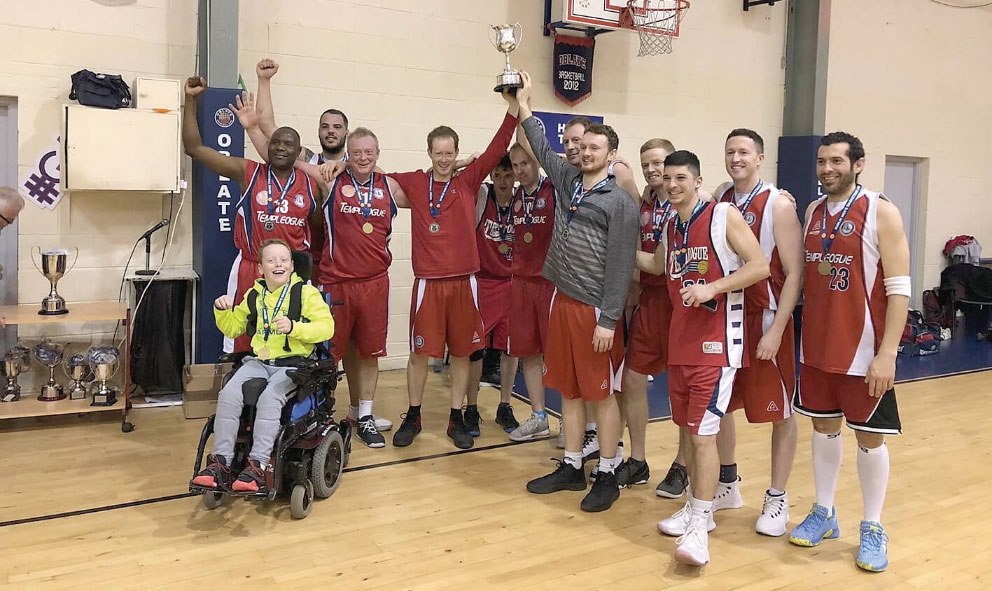 Templeogue are on the double in Dublin Cup Finals

While their Under 13s, 15s and 17s boys all fell at their respective final hurdles, the Templeogue Under 14s competed a league and cup double while the club’s Division Five Men’s team raised the Junior Cup.

Having finished up their league campaign unbeaten after a victory over Killester the night before, Templeogue Under 14 Boys took on Dublin Sonics on Sunday in the cup decider and ran out 86-43 point winners.

They made a blistering start, ending the first quarter 24-11 up with Daniel Carberry scoring 16.  Co-Captains Jacob Fazande and Jack Finn came on in the second quarter and together with Patrick Wood added a huge 31 points to see their side lead 55-23 at halftime.

Sonics, to their credit, were in no mood to give up and took the third quarter by four, but Templeogue were solid in defence and quick on the break, easily seeing out the game to cap a great season that is not yet over as they continue on to compete in the All-Ireland Club Champion- ships next month.

In the Junior Cup decider, Templeogue secured victory in the final quarter, running out 56-45 point winners.

In what was a very tight encounter, 12 three-pointers were the order of the day with seven registered by Kubs and five by Templeogue.

Caleb Brady and Aaron Connolly were the main long shooters for Kubs with Paulius Juzuitis following suit for the Reds.

Shane McGrath netted 11 points for the eventual winners with Aidan Maughan and Juzuitis each hitting nine.

Yet the real difference between the teams was a dominant performance on offensive and defensive boards by Templeogue’s, Craig Jago.

Michael Dempsey was both captain and coach of the team and his son, Finn, was presented with the cup at the medal ceremony.

It was heartbreak for Templeogue’s Under 17 who were beaten on the buzzer by St Vincent’s on Saturday afternoon.

Templeogue got off a solid start and were 21-15 up at the end of the first quarter before extending that lead to eight by the halftime break, Cian Finn planting two big three-pointers.

Jake Verschoyle for Vincent’s was a constant threat both inside and out with a first half tally of 14 points and a third-quarter rally by the northsiders saw them outscore Templeogue by nine to go one up.

Daniel Cassidy worked hard for Templeogue who ran into foul trouble at the end but led by one with 6.3 seconds to go only to see a buzzer-two by Jack Doyle for Vincent’s deny them at the death.

Templeogue Under 15 Boys will be disappointed at losing out 51-59 against Sonics in their cup final having come into the match unbeaten in the league that included a nine-point triumph over their Dublin rivals earlier in the season.

And they got off to a strong start here, winning the first quarter 14-9 with the second tied at 14 points apiece.

It was in the third quarter that Sonics took the lead and headed into the final period two points to the good, a deficit they continued to build on for an eight-point victory.

The sides will meet again in the final league game of the season.

The Templeogue Under 13 Boys came up against a strong Dublin Lions side in their Cup final on Saturday morning and lost out 29-52.

They were on the back foot from the start as Dublin Lions led 9-14 after the first quarter with Elmahi contributing nine of Lions’ points in that period.

Midway through the third the game was beyond Templeogue but they never gave up with Brady and Janas keeping the score board ticking.

Lions continued in the third and fourth scoring strongly with Bruce and Olokun combining well.

Templeogue will regroup and turn their focus back to the league knowing that a result in their final game will secure them that title.