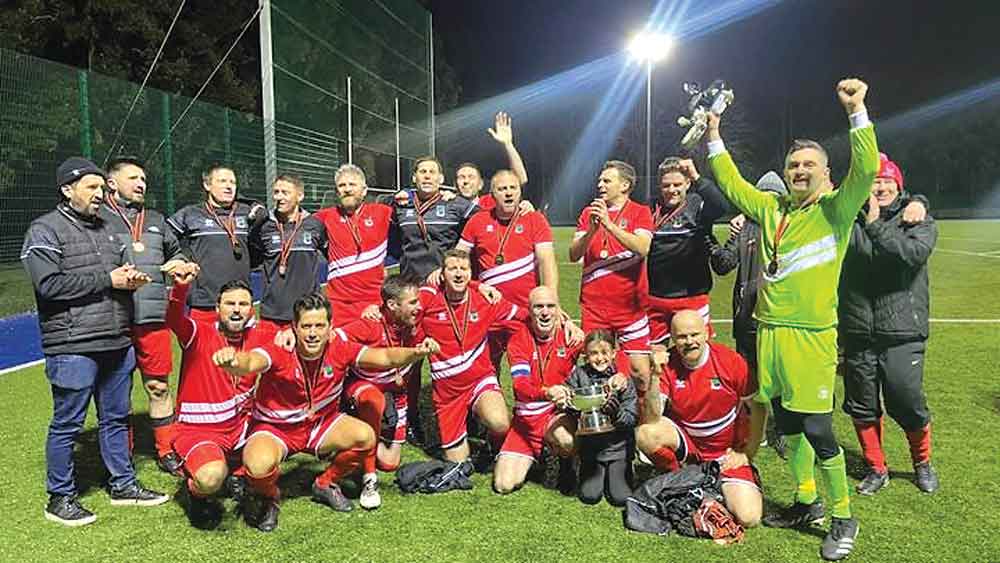 Templeogue United's over 35's celebrate with the cup

TEMPLEOGUE United over-35s showed all their class as they claimed the Amateur Football League Matt O’Leary Cup following a dramatic victory over Sheriff YC at Raheny’s all-weather pitch in St Anne’s Park at the weekend.

It took a penalty shoot-out to separate the sides in this contest with Templeogue coming out tops 7- 6 with keeper David Frewen saving two penalties in the process to help secure their second trophy of their campaign.

Indeed, Templeogue left it late to force a shoot-out after they equalised in the 90th minute when a long throw in from Declan O’Connor was headed home by David Harvey in a dramatic finish.

The sides were evenly balanced during normal time with Sheriff taking the lead after being awarded a penalty on 55 minutes.

United pushed forward after this with Edward Orr’s effort going inches off the mark while Gavin Quinn also had an effort cleared out to safety.

In the opening half, Mark Leech had the best effort for United, but his shot was kept out by the Sheriff defence.

In the closing stages of the second half, Templeogue piled on the pressure, and this paid off when Harvey slotted home the equaliser.

With no extra time played in this competition, a penalty shoot-out had to be played to decide the destination of title.

Keeper David Frewen proved to be the United hero when he saved two penalties in the shoot-out while Declan O’Connor, David Harvey, Paddy Cowzer, Stephen Caverly, Ian McDermott, Edward Orr and Robin Jones found the back of the net.

This completed a superb double for United who had already claimed the Amateur Cup at the end of last year after seeing off Mountview from Blanchardstown in the final. “It’s brilliant to do the double.

The lads have worked so hard for this,” remarked Templeogue United assistant manager Dave Barry who runs the team with Mick Barry.

“Sheriff are a very good team and its our first time to win this cup which is great. It’s a tough trophy to win with all the teams from Premier A and Premier B competition making it very competitive,”.

Only formed five years ago, this is one of Templeogue’s successful seasons to date.

NEWER POSTGood start to the year for Tallaght
OLDER POSTNature on our doorsteps: Why some Holly bushes never produce berries