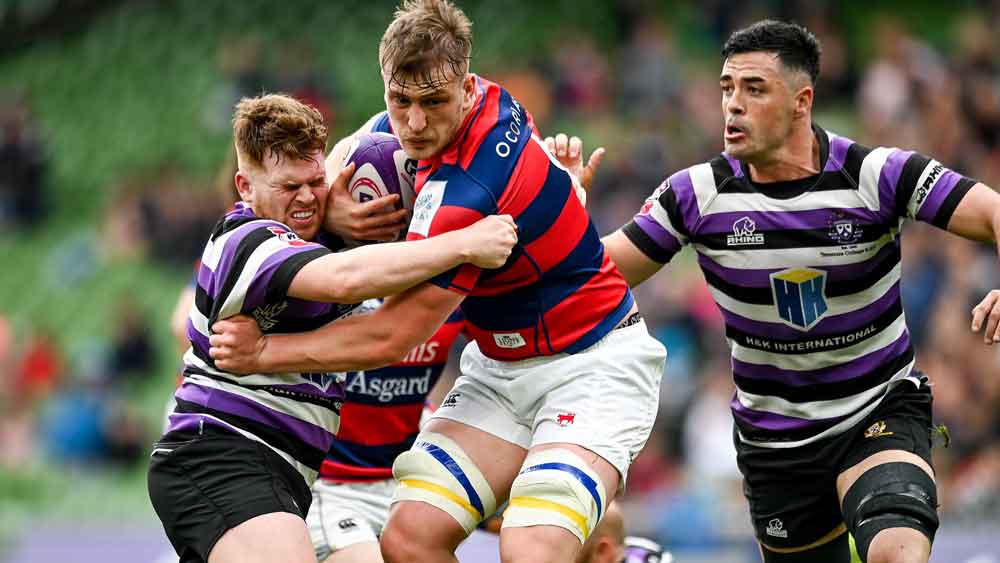 Cormac Daly of Clontarf is tackled by Levi Vaughan of Terenure College during the Energia All-Ireland League Division 1 Final match between Clontarf and Terenure at the Aviva Stadium (Image: Oliver McVeigh/Sportsfile)

THERE was heartbreak for Terenure College at the Aviva Stadium this afternoon as their bid to earn a maiden All-Ireland League crown fell just short at the hands of an impressively-drilled Clontarf.

Despite tries from Peter Sylvester and Alan Bennie – in addition to 13 points from the boot of Caolan Dooley – Sean Skehan’s men ultimately fell to a 29-23 reversal.

It had been a fantastic journey en route to this final and while the result didn’t go their way in the end, there is every reason to believe the Lakelands Park outfit will still be in the reckoning when the 2022/23 season moves into view.

There was no reason for Terenure to panic, however, and Dooley superbly split the uprights on the right-wing to restore parity in the seventh-minute.

Place-kicking has been a vital part of past AIL deciders and Kelly’s second successful effort at goal edged Clontarf back in front. However, Terenure (appearing in their first-ever final) rallied once again and established supremacy either side of the first-quarter mark.

After being picked out by scrum-half Bennie, Sylvester manoeuvred his way over the line for an opening try on 16 minutes.

Dooley was on hand to supply the extras and he later added a penalty to propel Terenure into a seven-point lead.

Yet their northside counterparts are a seasoned outfit and inched their way back into the ascendancy with three unanswered penalties courtesy of Kelly.

While Terenure squeezed ahead once again through Dooley’s latest three-pointer, Ben Griffin’s converted try ensured Clontarf were 22-16 ahead at the end of an enthralling first half.

This wasn’t an insurmountable deficit by any means, but Terenure were left with a mountain to climb when the action resumed.

Clontarf’s decision to kick a penalty to the left-corner proved to be a shrewd one as hooker Dylan Donnellan touched down off the ensuing line-out maul.

Although this threw down the gauntlet to ‘Nure, they subsequently showed that there is plenty of character in their side.

Following an extended spell inside the opposition ’22’ just shy of the 60-minute mark, Bennie bagged a try after Colm de Buitléar had been denied inches from the line.

Dooley’s conversion left the gap at six points and set up a grandstand conclusion to this domestic showpiece.

Indeed, they were camped inside the Clontarf half for an extended spell and had their sights set on turning the tables on their fellow Metropolitans.

It was something of a risk to not opt for the posts when the opportunity presented itself, however, as ‘Tarf eventually turned them over and worked themselves back up the pitch.

There was a final opportunity for Terenure off an attacking line-out at the very end, but Clontarf were not to be denied.

NEWER POSTRovers boss Bradley potentially on the radar of Lincoln City
OLDER POSTMatch of the Week: Firhouse spot on in Deering Cup epic