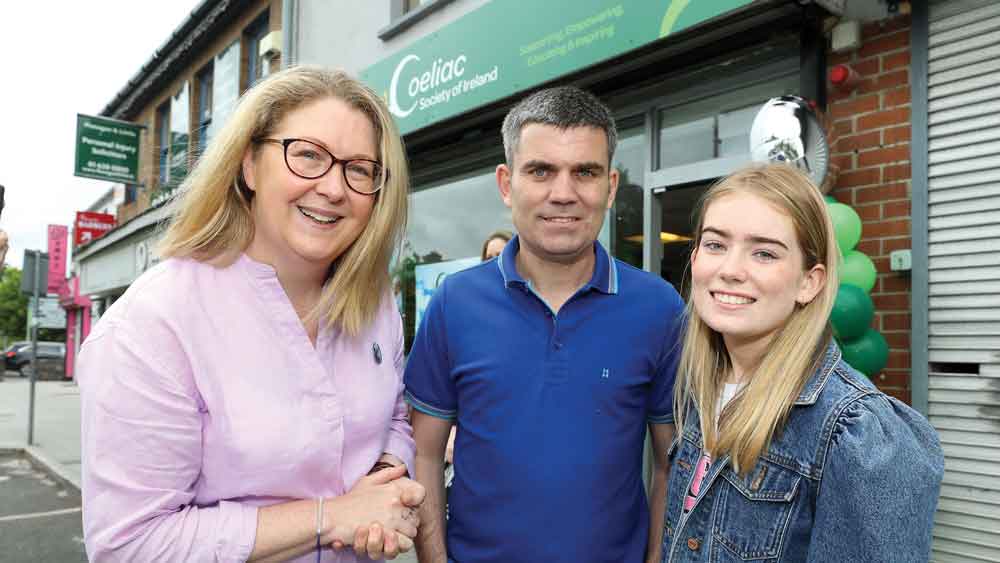 ‘Thanks to support’ from Coeliac Society Caoimhe (15) is thriving

CHAMPION boxer Bernard Dunne was on hand for the launch of the new Coeliac Society of Ireland headquarters and gluten-free shop in his hometown of Clondalkin.

The launch of the new premises on Tower Road coincided with the beginning of Coeliac Awareness Week, which has a particular resonance for Bernard as his daughter, Caoimhe, was diagnosed with the condition when she was a baby.

Delayed or misdiagnosis is a particular issue for those with coeliac disease, as it’s a life-long autoimmune disease for which the only treatment is a strict gluten-free diet.

Bernard’s daughter Caoimhe is one of the estimated 50,000 people who have coeliac disease in Ireland, but around 37,000 people with the condition are undiagnosed.

Bernard said: “We were very lucky that Caoimhe was diagnosed when she was just a baby.

“She had been suffering with vomiting, asthma-like symptoms, runny nappies and was having difficulties sleeping at night.

“It was really worrying because our GP at the time had no idea what was causing the illness but thankfully, she received a diagnosis after being admitted to hospital where a doctor recognised the symptoms and suggested a test for coeliac disease.

“After she was diagnosed, we immediately put Caoimhe on a strict gluten-free diet and the change was almost immediate.

“Thanks to the information and support we received then and in the years since from the Coeliac Society and others in the gluten free community, Caoimhe, now 15 years old, continues to thrive.

“I would encourage anyone with unexplained gut issues to contact the Coeliac Society to find out more about getting a correct diagnosis and how to manage living gluten free.”

The launch also kicked off this year’s Coeliac Awareness Week, which ran from May 9 to 13.

To find out more about coeliac disease, visit the Coeliac Society of Ireland’s website.