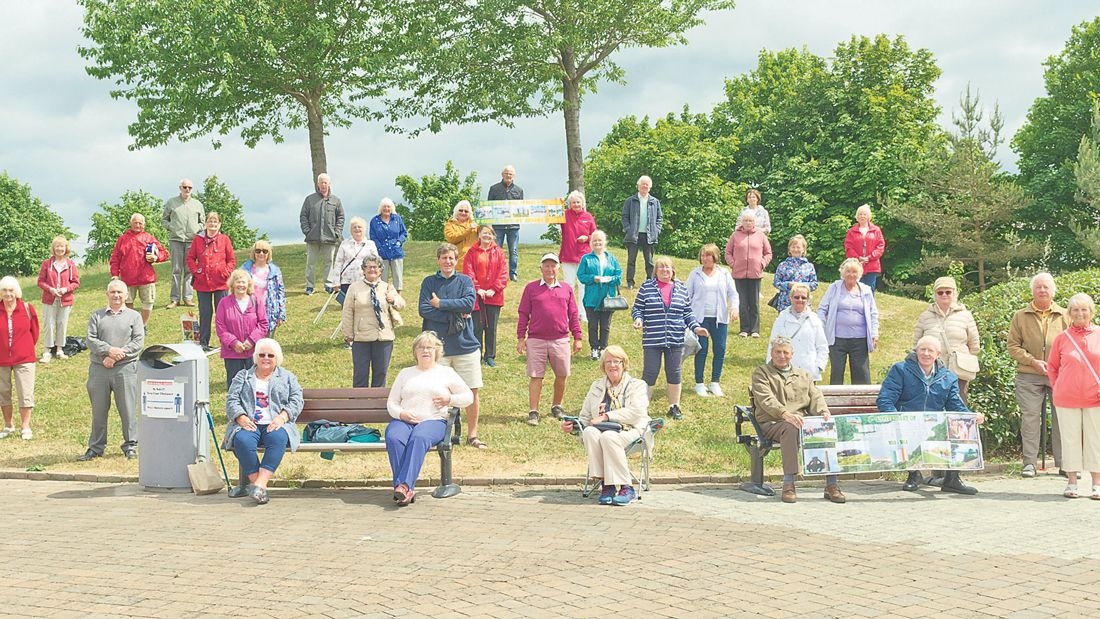 The members of an energetic social group for people over the age of 66 gathered, social distance style, in Sean Walsh Park to celebrate ten years on the road. Established in 2010, the Have Pass Will Travel group is made up of people who want to put their free bus pass to good use and together, embark on a range of monthly day trips.

The proactive and welcoming group, generally meets on the first Wednesday of every month and has, over the past decade visited Belfast and Killarney, and everywhere in between.

The group was started by Tallaght resident Vincent McNally, who, a Bus Eireann conductor, driver and supervisor before he retired, continues to run the group with his wife Eilish.

On his retirement, a few friends suggested that Vincent, who through his work knew all the best places, set up a group for people who would like to visit landmarks both within Dublin and further afield.

Now, 10 years down the road and the group is still motoring along, with up to 80 people on each outing.

“I always hoped the group would still be here after 10 years, but I didn’t think it would be growing all the time”, Vincent, who lives in Westpark, said.

“Over the years people have met new people, new friends and even met their neighbours.

“The friendships that have been built up over the years is amazing.

“The group has brought so much joy and happiness to people, especially to those who would travel if they had someone to go with.”

Dan Murphy and Albert Kearney with a 6th anniversary banner

In the winter time, the group visits landmarks, galleries and museums within the capital while in the summer time, they hit the open road and take in the country’s historical, cultural and beauty spots.

Pat Moran, who celebrates her 85th birthday this Friday, has been a member of the group for the past eight years.

“I have expanded the number of people I know and am friendly with from all parts of Tallaght”, Pat told The Echo.

“We’re all at an age where you want to have fun…and the group is such a wonderful idea, we have a great time.

“The group is good mentally, physically and socially, and commercially for all of the places we visit.

“It also broadens our knowledge of the country… it’s an absolute win-win situation.”

Thanking Vincent and Eilish for all of their hard work, Pat, who lives in Bancroft, said:

“Vincent is also the ideal person to be running the group because of his knowledge of the country.

“He knows everywhere and knows somebody everywhere.”

Living in Millbrook Lawns for 50 years, Kay Glennon (77) has been a member of Have Pass Will Travel since 2013.

“The group is absolutely brilliant, I’d highly recommend it to anyone”, Kay told The Echo.

“I got involved through a friend of mine who was going on the trips and I’ve introduced a few of my friends since.

“My first day trip was to Carlingford Lough and I’ve also been to the Titanic Museum in Belfast, Cliffs of Moher, Wicklow Jail and Spike Island.

“Vincent and Eilish are absolutely wonderful, everything is organised on the trips.”

Last week, members of Have Pass Will Travel met in Sean Walsh Park in Tallaght to celebrate the group’s 10th anniversary.

Day trips are currently suspended due to Covid-19 restrictions.

However, they hope to put the pedal to the gas as soon as it is safe to do so.

Reflecting on the past 10 years, Vincent said: “It has been such a worthwhile experience for myself and Eilish and we will continue to do it as long as we can stay on the road.”

Anybody interested in finding out more about Have Pass Will Travel is encouraged to call Vincent on 087 1232234.