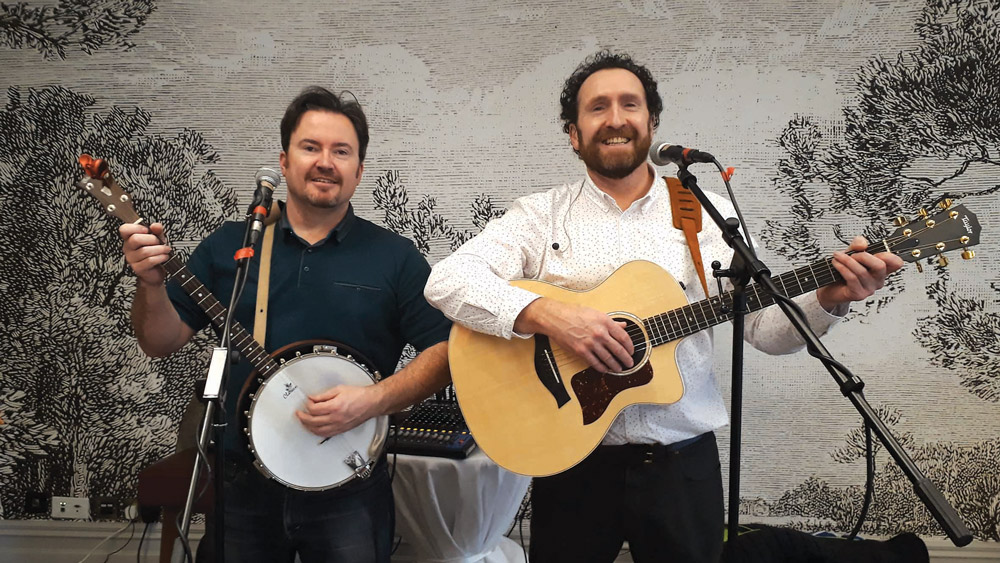 The Two Dubs whip up the crowds with energetic ballad covers

Formed by Tallaght brothers Paul and Frank Flynn in 2012, TheTwoDubs always aim to whip crowds up into a frenzy when they perform their Irish folk and ballad covers alongside some original material.

The duo, who are from Avonmore, are known for their energetic performances and were recently one of the support acts for musician George Murphy’s headline show in the Civic Theatre.

Their repertoire includes covers of hit songs by The Fureys, The Dubliners and Paddy Reilly, which are always well received by the audiences at their gigs.

Frank told The Echo about the reasons behind the formation of TheTwoDubs, their passion for Irish folk and ballad songs, and he explained why the band’s recent gig at the Civic was their best one yet.

TheTwoDubs was formed in 2012, what prompted this decision?

We both had additional time on our hands, after redundancy and a business was not going very well, so we turned our misfortune into an opportunity to fulfil a lifelong ambition to play one of our most beloved genres of music.

Have you always performed with your brother, or was there a distinct moment where you released you gelled well as a two-person band?

We had always played music together, but not in a formal, structured way, after an uncle gave us a banjo and Paul changed it to left hand. We had an epiphany after we did our first song as TheTwoDubs, ‘Dirty Old Town’.

What is it about Irish folk and ballad singing in particular that you find so appealing to perform?

We grew up with it in the 1970s. Our parents had records and had seen the likes of the Dubliners when they started in the 1960s. It is part of our Irish culture and it’s important to us to keep that alive and introduce it to the next generation

Talent is not enough to get you very far. You have to be persistent and resilient to survive at any level in the music business.

You have also performed as a support act to trad musician George Murphy. How did your link with George come about?

We have performed twice in the last three years as support in the Civic Theatre in Tallaght with George Murphy.

I reached out to George on social media, asking if he needed a support act in the Civic. He liked what we did, and the rest, as they say, is history.

There is a great mutual respect for the genre of music we do between us and George Murphy.

How would you describe the atmosphere at a TheTwoDubs gig?

We can really get the crowd going…singing along, foot clapping, but also bring a tear to their eye while listening to songs like ‘Raglan Road’ or ‘Scorn Not His Simplicity’.

What’s the best show you’ve played so far and what about it stood out to you?

It was the last gig we played at the Civic in February of this year. It was a packed house, and the crowd was there specifically to hear the music we do.

We got such a great response from the crowd, right from the very first song, ‘Come Out Ye Black and Tans’.

Everyone sang along, and that’s always very satisfying for us to hear! With Covid being over, we want to get back to playing regular live gigs again.

Where can readers go to find out more about TheTwoDubs?

They can check us out on The Two Dubs.