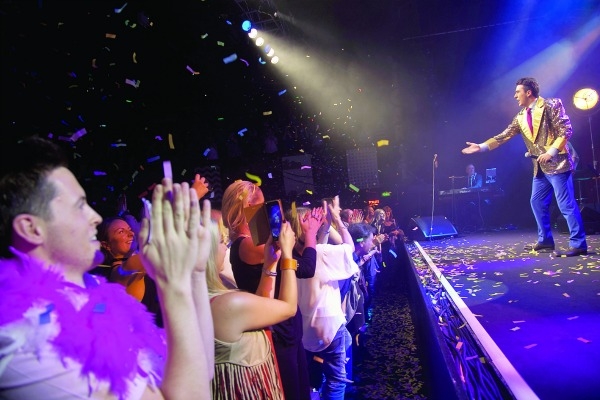 THINGS don’t seem to be slowing down for Springfield comedian and all-round showman, Al Porter – with the 23-year-old picking up two awards, enjoying sell-out runs at Vicar Street and appearing on TV3 show Livin’ with Lucy in October alone.

A star in Tallaght for quite some time, Al’s popularity has now grabbed the nation, with the former St Mark’s Community School student also making a name for himself on the international scene – where he is receiving rave reviews from critics, fans and fellow comedians.

Fresh from an award-nominated run at Edinburgh Fringe, Al is straight into auditioning and preparing for his Christmas panto – and picking up awards such as Tatler Man of the Year’s Best Entertainer, which he has now won two years in a row, and an IFTA for Rising Star.

However, despite a manic schedule, Al took five to speak with his local paper.

What was the first proper funny joke you remember hearing?

I’ve a rotten memory. Hours of script I remember but ask me what I did yesterday and I’ll draw a blank. Surely I heard plenty of jokes growing up – when I was a kid I did many shows with June Rodgers, the lads from Apres Match and others.

What or who do you think influenced you on your road to comedy?

Well, when you’re a camp lad in Tallaght who likes dancing not football you learn to find the funny side. I wasn’t given a hard time in school by any means but that’s because I learned early on that people laugh at difference and if you’re different you can get on by laughing at yourself.

In that way my school days and all the time I’ve spent at home has been my biggest influence. We all had nicknames in St Marks…I was Tommy Queernan. There was my friend Sarah Ward with the two kids – Maternity Ward. My mate ‘M’ who had his kidney removed so he was Morgan without the organ. Or my favourite, a lad whose dad had moved away so he was called Snap Crackle – because he had no Pop!

Who is your comedy hero and why?

Like music my taste in comedy is really eclectic – from Dame Edna to Tommy Tiernan, Brendan O Carroll to Doug Stanhope, Barrymore to Louis CK. I like a bit of everything if it’s done well and makes me laugh.

My comedy hero though is Frankie Howerd. He’s a bit forgotten these days but Frankie was a big BBC star in the 1970s and there’s always been something magic about the dodgy hairpiece, tie eschew and the catchphrases like ‘titter ye not’ and ‘shut yer face’.

You recently won an IFTA, how did that feel?

I was genuinely shocked and so grateful. It was a public vote so you should see my phone bill – it’s not that the others didn’t deserve it they obviously just didn’t have enough credit!

You dedicated it to Tallaght, why?

Of course I dedicated it to Tallaght – I love my area, my neighbours, our pubs, our banter. People from here have been incredibly supportive of me over the years and I want the same for any young local lad or girl getting up and trying to make it.

What are you memories of growing up in Tallaght?

That’s a funny question because I still live with my folks in Springfield so it’s I’m not looking back on my time here – I’m still in the thick of it! Overwhelmingly I’d a great childhood– we’d play kick the can, I was the can.

We used to play IRA – but I’d just be the hotel receptionist. Once I kissed a girl whose surname was Benson in a bush. That incident was known as Benson and Hedges. All good times.

Do you think it’s important for young people to feel that anything’s possible and to follow their dreams?

Absolutely. I’ve realised that I’ve been dealt a very lucky hand – from my childhood to now – it’s been a road with plenty of positivity.

So of course, I’ve grown up believing in my dreams and not feeling guilty to ask for them. I met a lad this year who felt lost. He’d been dealt a far tougher hand growing up.

And I realised he didn’t think he deserved more. But he does. And more means something different to everyone. It might mean fortune, maybe family, friendship, it might mean some unforgettable memories to be made. Whatever it is – it’s your due.

Don’t be afraid to love yourself and don’t feel guilty for wanting a great future.

What inspires your material?

If you’ve been to an Al show – anyone will tell you – they’re sparkly, they’re loud, they’re fun and they’re fecking long! Combined with that show business is a lot of honesty. So I talk about family, relationships, sex, religion, therapy, holidays, celebrities. You name it, I talk about it.

Did anything inspire or make you laugh today?

A fella added me on Facebook whose name was Neil Hoare. To be fair, that was a giggle.

We saw your cat and dog on Livin’ with Lucy, has the fame gone to their heads?

Oscar the Jack Russell and I have always had a lot in common. Our bark is worse than our bite and we’re often found chasing men down the garden. So he’s the same. Lucy I refuse to go near because I’m allergic to cats – make your own easy jokes here.

How did your mam and dad react when they saw themselves on the TV3 show?

My ma was delighted because she was worried she’d be mortified but the house looked great (her cleaning definitely did the job)! I think my da was a bit peeved he didn’t get more airtime but Mickipedia is always looking for the limelight so it serves him right!

You spoke openly on the show about the issue of suicide in your community, do you believe that youth mental health is an area that requires attention?

Massively so. There’s a crisis in our country among a population that is lost, directionless and lacking confidence. Young people navigate a very tricky existence – between the illusion of opportunity (think internet and the small world it creates and the false glamour of it) and the reality of the struggle to actually find work and get your start here at home. It’s tough for a lot of people.

What in your life makes you feel happy and positive?

That’s simple – performing and friendship. I value the two above everything else. Getting the ride is also extremely important but that’s a fleeting kind of happiness!

What’s on the cards for the coming months?

No rest for the wicked. The stand-up tour rages on with lots of sold out dates, I’ll continue to write my column for the Star, I’ve also to write and produce the Olympia panto ‘The Ugly Sisters and Yer Wan’ – the follow up to ‘Freezin’ – and star in that for the Christmas season.

I’ll fit a bit of telly in too and hope people will look out for me on a big BBC show I’ve recorded for before Christmas!