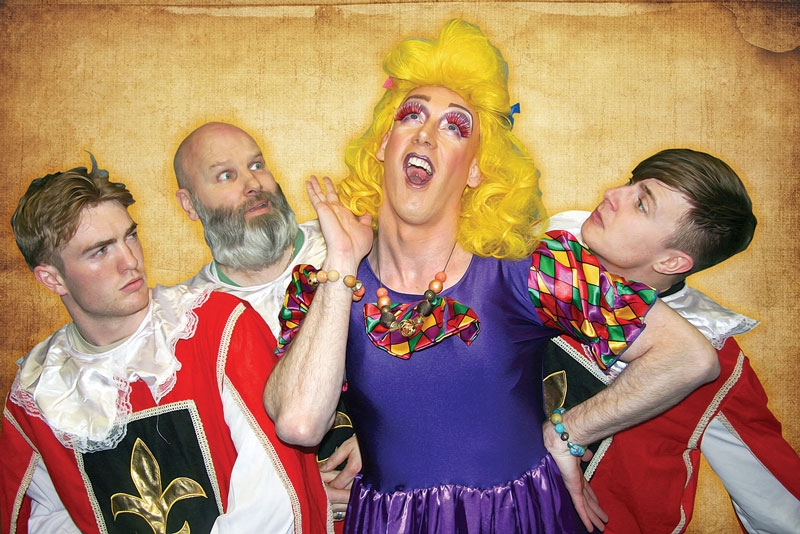 Three Musketeers at the Civic

With Christmas coming around the corner, pantomime shows are returning to the stage.

The Civic Theatre is presenting the three greatest swordsmen in the land, who are on a mission to return the King’s stolen treasure.

The Three Musketeers will have to face the evil Cardinal Richelieu and the Wicked Witch of the South West, so they are looking to recruit one more musketeer.

Enter Dame Lola, who is heading for France to search for adventure and amour, and does not believe a musketeer has to be a swordsMAN.

John McGouran, the man who brings Dame Lola to life, took time out of his busy schedule to speak with The Echo Newspaper, to talk about his career in pantomiming and playing the character, Dame Lola.

How long have you been pantomiming?

I began pantomiming in 2009. Causeway Productions started in The Cuckoo’s Nest before moving to the Civic Theatre. It was great fun, and pantomiming just becomes a part of Christmas in Tallaght.

Which show was your favourite?

Cinderella was my favourite show. I played one of the Ugly Sisters. But, every year is enjoyable. I love working with the children. About 40 kids are in the show, and it is great to watch them grow and learn. It is just so much fun.

What do you do outside of pantomiming?

I am involved in football at the Shelbourne Football Club. And I also work in Human Resources at PaddyPower. It is quite a contrast from playing football to dressing up as a woman.

What do you enjoy most about pantomiming?

The audience at the Civic. There is just something unique about the Civic Theatre. It is just the perfect size for pantomiming. And panto is not just about the actors. The audience are encouraged to join, sing along and dance. Especially the Daddies. Daddies are very important, particularly at the end. Panto is also for all the family, whether you are 2 or 82, even older. There is something for everyone. Kids love the prince, and the parents connect to the Dame. But each member of the family enjoys the show equally.

How did you get involved with Causeway Productions?

I had worked with Causeway Productions Director Gerry Herbert, in a production of ‘Red Roses and Petrol’ in 2009. Later that year, Gerry approached me to ask if I would be interested in playing the Dame for the production of ‘Sleeping Beauty’, and as a huge Panto fan, I didn’t hesitate to take on the challenge!

How long have you been playing the role of Dame Lola?

When I joined the first year, Dame Lola was already in the script. Everyone would know it is her by her looks and her sayings. She will address the audience with a “Woo Hoo” and is known for telling people, “I’ll reef you.” She is built into the fairy tale, usually just to create chaos.

What do you find to be the most enjoyable part of playing a woman?

It’s the character I enjoy playing most. Dame Lola is based on a hybrid of my mother Sheila and my Aunty Rosey –  two mad Dublin women! That said, being tall, lanky, wearing 4-inch heels and dressing up in colourful clothes, is a lot of fun. Although, how women walk around in 4-inch heels I’ll never know…… I look like Bambi on Ice when I get into mine!!

What do you find is the most difficult part of pantomiming?

The schedule. We have 18 shows, and sometimes two shows in the same weekend. But the cast is great. We are all dedicated to making it the best show, and we all have just as much fun in the dressing room as on the stage. We want to make it enjoyable for the audience.

Can you tell me about the development of Dame Lola?

My first year, I was petrified. The Dame is very important to the show and there is a lot of responsibility. The Dame is supposed to be funny and outrageous. My first year, I just stuck to the lines and didn’t add much. But as I gained more confidence and learned what worked and what didn’t work, and what I can and can’t do, it was easier.

The Three Musketeers are at the Civic Theatre from December 14 until January 7. Some shows are sold out and others have limited availability, so buy your tickets while you still can! For performance times are ticket prices, go to www.civictheatre.ie