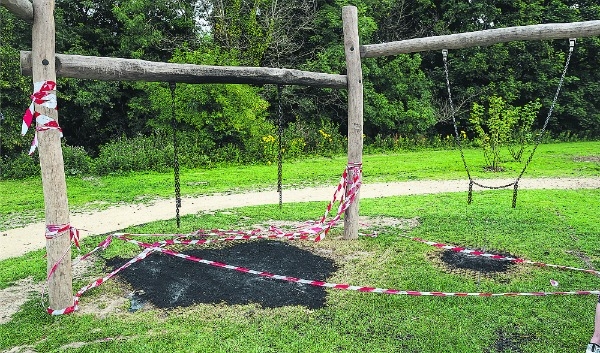 A SPECIAL swing for disabled children was destroyed at the new Tymon Park playground in the first instance of vandalism since the playground’s re-opening in April of this year.

An accelerant was used to start a fire at the swing set, resulting in charred ground and melted rubber matting, damage to the structure and total ruin of the two swings, one of which was specially designed for use by children with disabilities.

The playground cost €150,000 to build, and €1,000 will be needed to cover the cost of repairing the rubber matting and replacing the two swings. This repair work should occur in the next week.

The playground was opened on April 7 this year after seven years of lobbying by the community and council members that started when the old playground was closed due to safety concerns.

According to a spokesperson for South Dublin County Council, the structures are made of a “robust material” that is difficult to damage, however, the swing was specially designed and could not be made of a stronger material.

The spokesperson said: “We are obviously very disappointed, but thankfully such vandalism is very rare; we have had many teenagers using the playground and their behaviour to date has been  very respectful of other users.  Now and then there will be incidents like this, but it will not deter us to ensure children  in South Dublin have great opportunities to play and explore close to where they live.

“Every day since opening we have had hundreds of users and the response of children and parents has been brilliant.”

The spokesperson added: “Each day children get hours of play and exercise and engage in wonderful adventures in the playground and surrounding woodlands. We do not want to fence the playground off from the woods and diminish this play.”

Labour councillor Mick Duff, when contacted about the vandalism, was upset that anyone could do such a thing and said: “I’m horrified that anybody would set out to damage such an enjoyable family facility. We are lucky the damage was fairly minimal, and the park didn’t need to be closed, but it truly is a mindless act.

“The fact that the damage was done to the handicapped seat is, we think, merely because it was easier to set alight – there’s no thought process behind this vandalism. “We ask people to remain vigilant, and report anyone who looks suspicious to the rangers. The park is too precious a facility to be closed because of vandalism. It would be a shame to have to close it for more major repairs.”

He added: “Moving forward, I will be calling on SDCC to secure funding for phase two of the playground, an extension, upgraded toilets, and a refreshment station; this is not a finished project.”