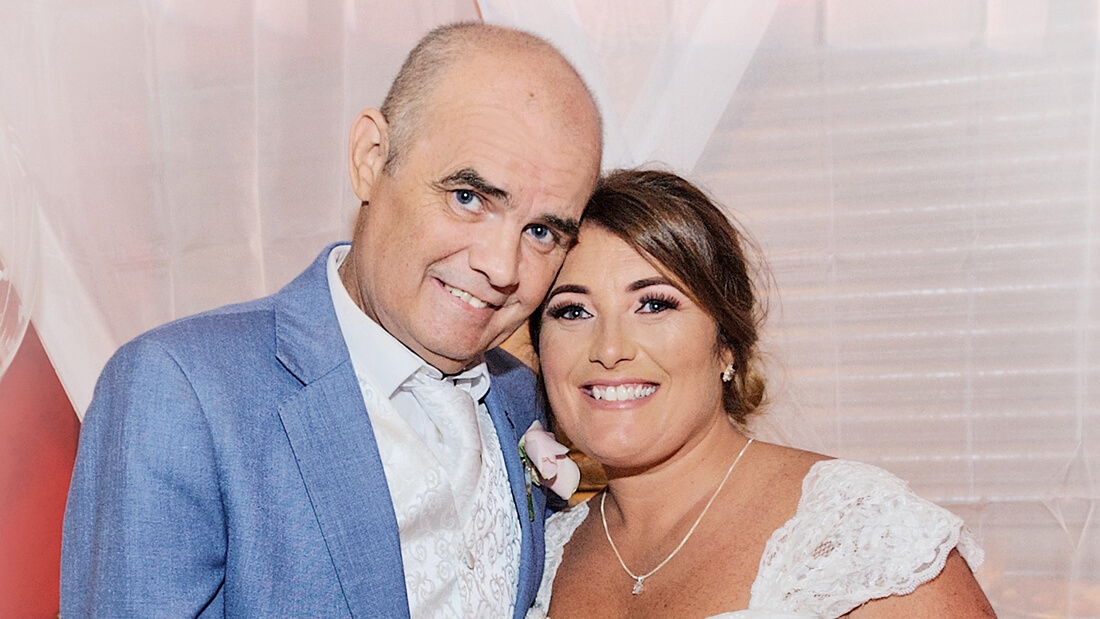 ‘Time is so precious’ for couple celebrating wedding anniversary

PAT MURPHY who has terminal cancer and has been told he has less than two months left to live, took to the stage with his band for the last time on Saturday night at a fundraiser in aid of Our Lady’s Hospice, in the Long Mile Inn in Walkinstown.

Over €1,000 was raised for Our Lady’s at the event, which was organised by the 53-year-old Walkinstown man. The venue has a particular resonance for Pat and his family as he got married in the Inn this time last year – shortly after he received a diagnosis of terminal cancer.

Pat was diagnosed with throat cancer in October 2017, but the disease then spread to other parts of his body, leading to a diagnosis of terminal cancer in May 2018 – with Pat and his partner Tracey Jacobs deciding to tie the knot in the Long Mile Inn the following month.

At the time of his terminal diagnosis Pat was given between three months and a year to live, but now, a year later, he’s still fighting the disease and had been planning the fundraiser night for several months.

Pat’s wife, Tracey, who is originally from Crumlin but now lives in Tallaght, told The Echo: “It’s very emotional, because last year we didn’t think we’d get to this point.

“Time is so precious, so we’re going to celebrate our wedding anniversary together with our family at home.”

On the night of the fundraiser Pat reprised his role as a bassist for his band Little Brother, with whom he has been performing for over 30 years at various local pubs and fundraising events, and despite his ill health he was determined to perform with his bandmates.

“He was so focused on playing with the band that he was going to do the gig, no matter what,” explained Tracey.

Pat and Tracey Murphy at the night of the fundraiser

“When he was in the hospital and the hospice in the weeks before it, he was so adamant that he would do it.

“When he went on stage he was very tired and shaky on his feet, but he still managed to do the whole set, and he was exhausted afterwards.”

Tracey added: “Pat organised every bit of the fundraiser – even when he was in the hospice he was on the phone to people talking about it.

“Pat was in the hospice for two weeks and when we realised the work they do, and the care and support they give, we decided it was a worthy cause.

“He’s delighted with himself. He has so much strength and he just keeps going.”

Pat is now back home with his family, and he is looking forward to celebrating his one-year wedding anniversary on Friday, surrounded by his family.

Tracey said: “You realise how precious time is, how every hour counts, but it’s running out for us.

As for the coming weeks, Pat is hoping to go on a train trip down the country with their five-year-old daughter, Lily, as the young girl has never been on a train before, and he’s determined to make lots of memories with his family. See photos on page 60.