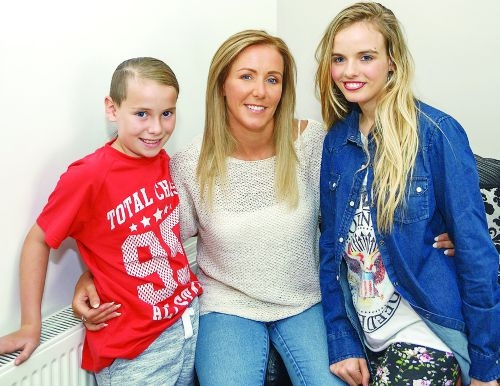 Treatment can help brave Wendy halt the deterioration of condition

A TALLAGHT mother-of-two diagnosed with primary progressive multiple sclerosis has embarked on a race against time to raise €60,000 by March, when she has the chance to undergo treatment which can help halt the deterioration of her condition.

Wendy Johnston (40), who lives in Old Bawn with her daughters Megan (20) and Holly (10), was sent for an MRI last September after she experienced a number of symptoms, including a loss of power in her leg and arm and blurred vision in her left eye.

During the MRI lesions were spotted on Wendy’s brain and spine, with a lumbar puncture in January confirming that the active young mother had primary progressive multiple sclerosis (MS) – a type of MS which patients do not get remission from.

Wendy, who is a special needs assistant, learned of a treatment called hematopoietic stem cell transplantation – which involves a person’s immune system being totally stripped back with high doses of chemotherapy followed by the replacement of their own stem cells.

Wendy stressed that, in cases of progressive MS, the treatment cannot reverse any damage done before the procedure but that it can halt the progression of the condition.

After starting a fundraising campaign in the summer, Wendy has now gotten a date for treatment in Mexico this March and is seeking the community’s support in raising the operation cost of €60,000, which will see her, and a carer, having to stay in Mexico for six weeks.

Last weekend, a fundraising night in the Postal Club on the Kiltipper Road was held for Wendy, during which an estimated €10,000 was raised.

Wendy told The Echo: “I can’t thank people enough, I couldn’t believe the amount of support that I received.
“A massive thank-you to everyone and to all of those people who are organising different fundraising events in the coming months – it means so much to me and my girls.

“I’m feeling good at the moment, a bit tired and my eyesight has gone a bit blurred but I’m still walking and I hope my condition doesn’t deteriorate much more between now and March.”

Anybody who is interested in organising a fundraiser for Wendy is encouraged to call 085 7277741. Turn to page 66 for images from Saturday night’s fundraiser.