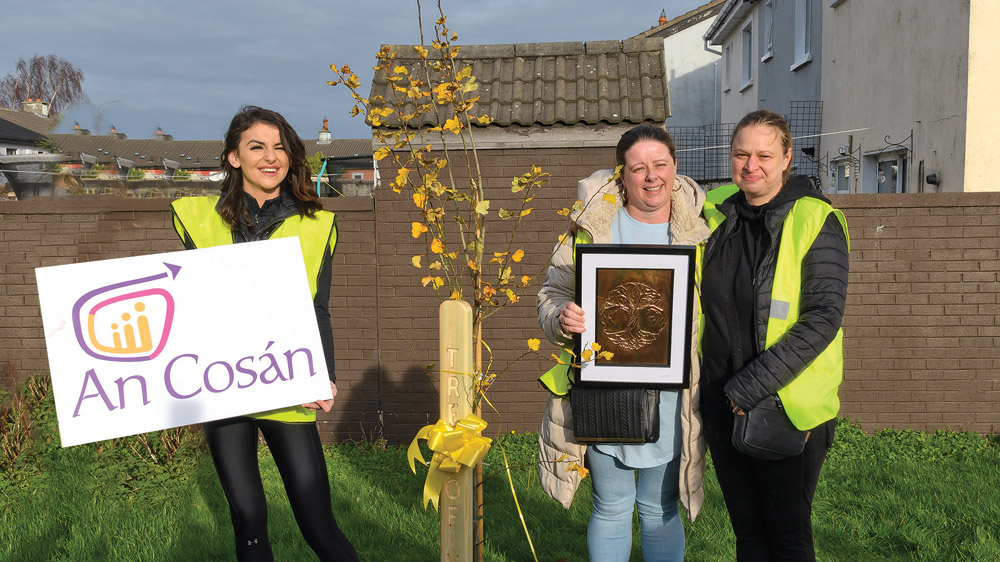 Daneille, Manuella, Lisa and Nikola at the Tree of Hope planting ceremony

Tree of Hope planting to remind others of support

A TALLAGHT mother-of-two who is currently experiencing homelessness has spearheaded the planting of a Tree of Hope adjacent to An Cosán in Jobstown–to remind others that there is hope.

The tree was planted by Tree of Hope founder Noeleen Fulham and volunteer Mairead Walsh, who also donated the stake and plaque that was placed alongside the tree.

The Tree of Hope was unveiled by Mayor Emma Murphy last Thursday, December 1, marking the culmination of several weeks of work by Manuella Killeen and her classmates in An Cosán.

Manuella, 26, is originally from MacUiliam but as she registered as homeless, she has been reallocated to Naas with her six-year-old and ten-month-old sons.

Her six-year-old attends school in Citywest and Manuella would get buses from Naas to Citywest daily while wandering around Tallaght and the Square with her baby for hours before collecting her older son from school.

Earlier this year, Manuella said she was on a bus when another commuter began talking to her and made her aware of the services that An Cosán offers, such as education and childcare.

“I was really lucky that day,” said Manuella. “I got in touch with An Cosán and I was able to continue my education while my son was in creche.”

Manuela started attending a community development course in An Cosán in September while her older son was in school.

For one of her assignments, Manuella decided, along with some classmates, to get a Tree of Hope planted in the area.

“Myself and my three colleagues, Lisa, Nikola and Daneille, decided to do it as part of an assignment,” she explained.

“We realised that there was a real lack of hope in the community, and we decided to do a Tree of Hope.” 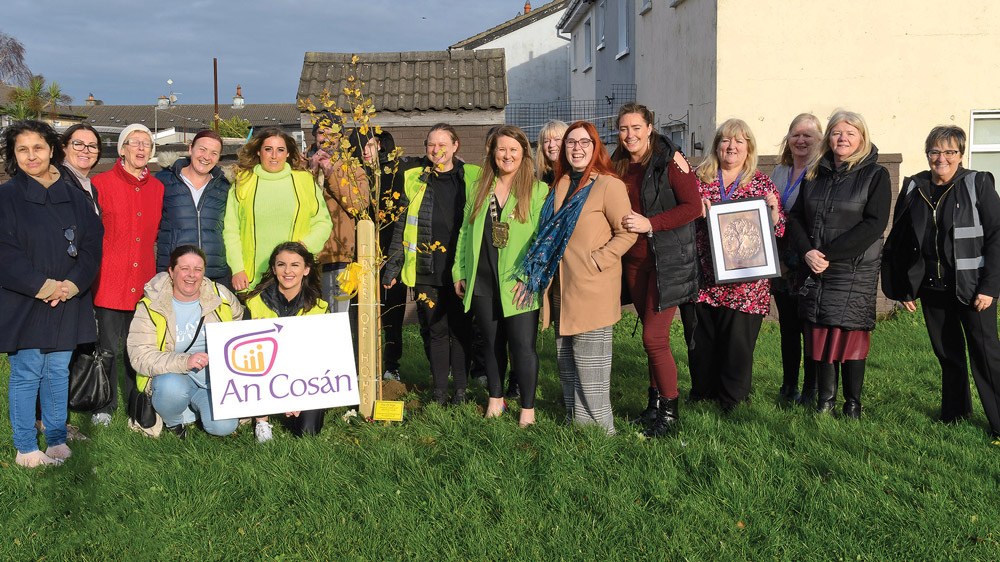 At the tree planting, artist Lisa Smith presented a copper piece to An Cosán called the Tree of Life, in recognition of how the education service has helped so many people to find hope.

Many members of the community and staff from local support services attended the tree planting last week, which was a pivotal moment for Manuella.

“I just couldn’t believe it,” she said on Tuesday morning. “All the work we’d done…it felt amazing. I was flabbergasted.

“Everybody was so warm and welcoming. From start to finish, everything went so well.

“Since it’s been planted, we’ve noticed people stopping at the tree and reading the plaque.”

The Tree of Hope opposite An Cosán is the 80th Tree of Hope that’s been planted, and Manuella hopes it will positively impact people across the community.

“I’d love for people to see the tree as a bit of hope,” she said. “For them to see that there’s support out there for everybody.”

Manuella’s also planning to hand out leaflets in local community centres to make people aware of support services in the locality so she can make other people aware of their options, like the bus commuter who told her about An Cosán.

“I’m really hoping to try to make somebody’s life a little easier with information, because knowledge is key,” she said.