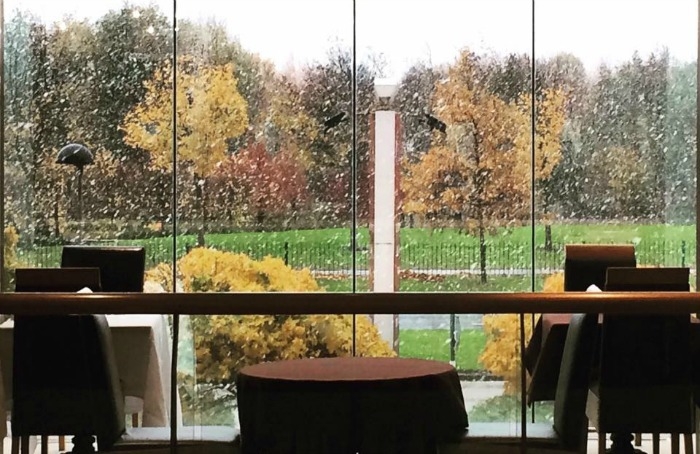 TRENDING: Irish people really get excited when it starts to snow

There was a little surprise for everyone this morning when it began to snow in Dublin, and in typically Irish fashion, people freaked out at the first fall of the winter.

Having battled through heavy traffic, many commuters were still stuck on the roads when the flurry began, and it did not take long for #Snow to begin trending on Twitter, eventually becoming the top trend in Dublin by 10:15am.

PIC: Taken in the Plaza Hotel by Ewa Studzinska (Facebook)

The weather forecast for the rest of the day is to be largely the same, with low temperatures continuing and rain turning to sleet in parts.

For many, the arrival of the snow was too much to handle, while for others, it was the perfect time to crack out the snowflake and snowman emojis!

Does this mean it’s officially Christmas?

SOUND THE #SNEACHTA KLAXON!!! it’s snowing on the N7 around Citywest and on the M50 around Tallaght pic.twitter.com/IbVMkvL7BD

It’s snowing in Tallaght If this doesn’t signify the start of Christmas I don’t know what does How I wish I was home snuggly & warm!

From having the @AllBlacks yesterday to all white this morning #snow #Dublin #ireland pic.twitter.com/rscV2AttLI

Meanwhile, in Clondalkin, the snow seemed to be heavier than in other parts of Dublin!!!

While in Lucan, the perfect festive scene was captured by RTE’s Fergal Bowers.